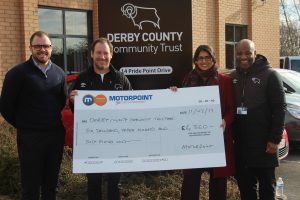 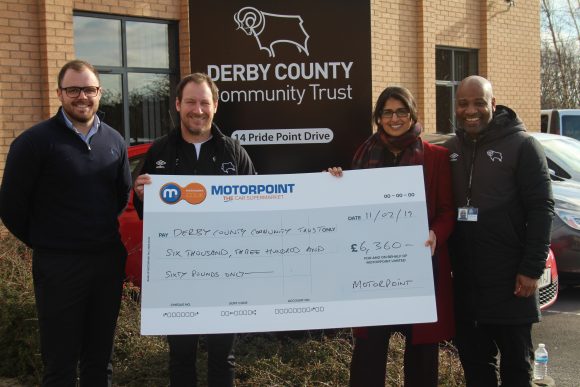 MOTORPOINT staff raised more than £6,000 for charity when they swapped their suits for sleeping bags.

A four-strong team from the independent car retailer’s headquarters in Derby braved sub-zero temperatures to take part in the Stadium Sleep-Out event outside Pride Park, home of Derby County Football Club, in aid of the club’s community trust.

Commercial director Jon Baird, marketing director Eleanor Shakespeare, company secretary Manjit Virk, and preparation and projects manager Ben Wall spent a Friday night with other participants, including trust partners, sleeping in the shadow of the stadium with only cardboard, warm clothing and a sleeping bag to help see them through the night. The quartet of colleagues raised £6,360 – more than three times the amount they were aiming for.

The money will be used to support Rams In Kenya – a flagship programme at the trust that will be making its eighth trip to the slums of Nakuru this year to support the building of facilities that will help children living in absolute poverty. It will also help vulnerable individuals in Derby who are at risk of becoming homeless through substance and alcohol misuse, or those who are recovering from addiction and are leaning on the support of the trust and other charities to overcome difficult times in their lives.

Eleanor said: ‘We really can’t thank people enough for their generosity. It’s hugely appreciated. It was very humbling for us all sleeping rough for the night, but what made the cold that much more bearable was being able to make a difference to those less fortunate and get more people off the streets and into permanent accommodation.’