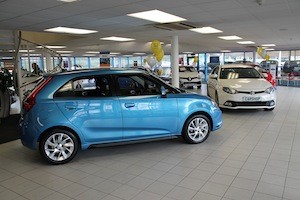 NEW car registrations in February 2014 grew by three per cent to reach 68,736 units, according to the latest SMMT figures.

The UK car market has now recorded two full years of growth, increasing 17.4 per cent over the period, and providing evidence that Britain is finally emerging from the long and difficult recession of the past few years.

‘While February is typically a quieter month ahead of the March registration plate change, we expect the arrival of the new 14-plate and increasing economic confidence to maintain a steady rate of growth.’

‘We’ve seen growth every month for two years, and March’s all-important plate change is sure to keep demand accelerating, before the market starts to level out.’

While the supermini segment recorded solid expansion over the past two years, volumes in the mini segment almost doubled, helped by the introduction of a variety of new models.

More and more motorists are turning to the small car market in a bid to reduce running costs. Dual-purpose vehicles (now the third largest segment) and MPVs have recorded above-average growth over the past two years, with space, style and versatility attracting customers.

Top seller in February was the Ford Fiesta (4,415 registrations), with the Vauxhall Corsa (3,138) and Astra (2,707) in second and third place. Making up the top ten (starting with the fourth-placed car) were the Ford Focus; VW Golf; VW Polo; Mercedes-Benz C-Class; Vauxhall Insignia; Audi A3; and BMW 3 Series.

The Fiesta is also top of the heap in the year-to-date figures with 13,487 registrations – more than 5,000 ahead of the second-placed model, its bigger brother, Focus (7,899 registrations).

The other cars in the year-to-date top ten (starting with third place) were the Corsa; Astra; Golf; Polo; A3; Qashqai; Juke; and Fiat 500.