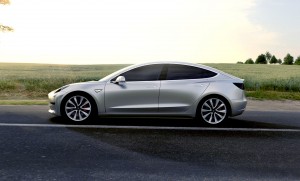 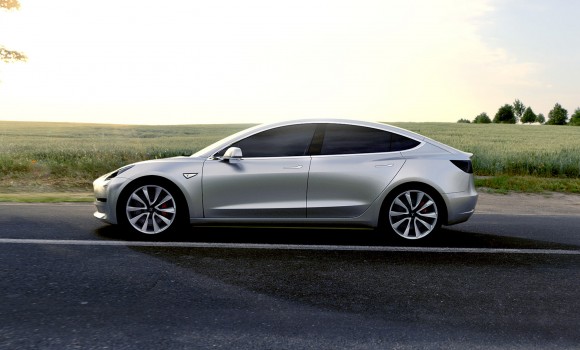 Speaking at a launch event in California, he said some 115,000 people have so far pre-ordered the five-seater Model 3, which will go into production late next year.

The company hopes to eventually produce up to 500,000 vehicles a year, he added.

It is available for pre-order in a host of countries, including the UK and Ireland.

Unveiling the prototype, Musk told the crowd: ‘We think you are going to be blown away. These are minimum numbers – we hope to exceed them. It has front and rear trunks. It has more cargo capacity than any gasoline car of the same dimensions.’

All Models 3s will come with autopilot hardware and safety features, as well as supercharging – fast charge – capabilities, Musk said.

The semi-autonomous features include automatic lane changing and lane-keeping.

The company intends to expand its worldwide charging network, doubling the number of supercharging units and increasing its destination chargers fourfold by the end of next year.

The car, which costs £1,000 to reserve in the UK, follows the company’s higher-priced offerings, the Model S and Model X.

On SuperUnleaded.com: Want To See A Phone Controlled Car? Of Course You Do