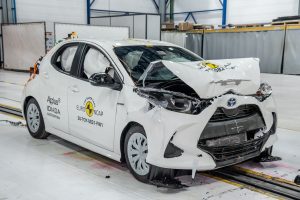 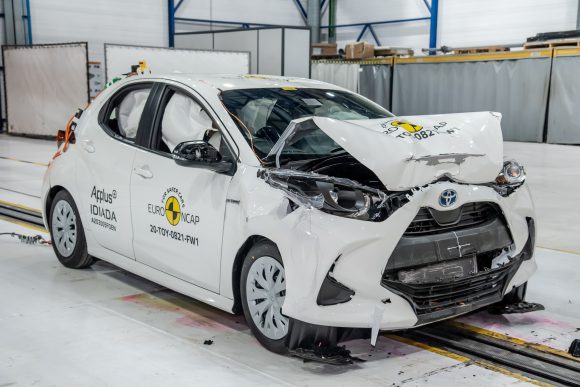 The new Toyota Yaris has been handed a five-star rating after being subjected to Euro NCAP’s latest 2020 testing programme.

A new front offset test has been introduced, which replaces one previously used by Euro NCAP since it started testing cars in 1997.

A moving, deformable barrier is used to assess how much protection a car gives to its occupants while also checking how much risk the impact poses to the car overall.

However the Yaris, which is now in its fourth generation, features interior air bags which are mounted in the centre of the car.

These inflate during an impact and limit the amount of side-to-side movement the occupants can make. By doing so, it reduces the risk of occupant-to-occupant contact.

‘This has been a tough year for all concerned and I am grateful to Euro NCAP’s labs and employees who have worked hard to deliver safety, while staying safe.

‘We have had to adapt quickly to new working practices, and it is pleasing that the first car rated this year should have gone so far to address the safety issues that are emerging as top priorities.’

Euro NCAP has also highlighted the Yaris’ range of avoidance systems, particularly a new addition which can stop the vehicle during a turn in order to avoid a crash with oncoming traffic.