Home > News > Newcomer Shaunah’s made Employee of the Month – after 46 sales in September! 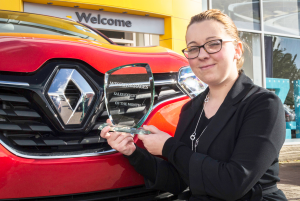 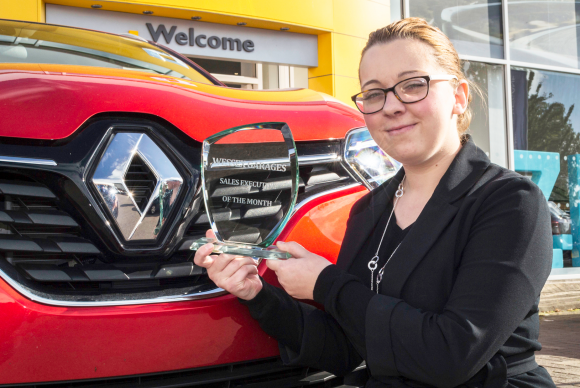 Newcomer Shaunah’s made Employee of the Month – after 46 sales in September!

A 25-YEAR-OLD sales executive who has only been in the job since April and sold 46 vehicles last month has been named Employee of the Month by her employer.

Shaunah Wilkins was presented with her award at Wessex Garages’ Newport Retail Park for delivering the best all-round attitude and performance among the group’s sales executives in September.

Wilkins, from Newport, who is a Renault and Dacia sales executive, said: ‘I was overwhelmed to have won the award for Employee of the Month. I would like to thank Wessex Garages for the recognition.

‘It’s my first experience in car sales, as my previous position was as a manager for Wetherspoon, so this is a very different role. I started working at the dealership in April, so September was my first involvement with the registration plate change. I was very happy with my performance.

‘The best part of my job is that I get to meet all sorts of people and help them find a vehicle which is perfect for their lifestyle. I am so pleased when they collect their cars and they are beaming.’

Wessex Garages, which has outlets in Bristol, Cardiff, Gloucester and Newport, specialises in new and used car sales.

Martin Watts, general manager at Wessex Garages on Newport Retail Park, said: ‘Shaunah sold 46 vehicles in September, which is a fabulous performance for someone who has only been in the industry for six months. She also made the time to assist her colleagues and manager with their duties in this busy period.

‘It’s great that we have individuals within our team who are really enthusiastic and have the drive and determination to achieve. We really appreciate Shaunah’s positive attitude towards her work and colleagues.’

On SuperUnleaded.com: One Of A Kind Rolls-Royce With Palatial Interior Is Going Up For Auction