Nissan has created an emergency response vehicle based on its all-electric Leaf that’s designed to provide a mobile power supply in disaster zones.

Called ‘Re-Leaf’, the concept is a fully functioning car that’s been created to showcase how the standard, road-going Leaf’s batteries can be used as a power supply in areas hit by disaster or extreme weather.

The main addition, however, are three power sockets so items needing emergency power can be plugged in.

There are two weatherproof external C-Form connectors and an internal domestic socket in the boot, and the Leaf’s battery power can be distributed at up to 230v.

Inside, the back seats have been ditched and there’s a bulkhead behind the front seats. A bespoke pull-out desk can be pulled out from the rear with a 32-inch LED screen and power supply to create an operations hub to run emergency operations. 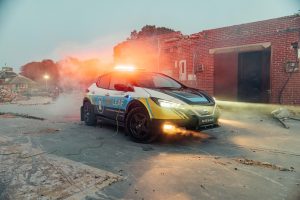 While it’s a showcase, the Re-Leaf’s concept is based on other Leafs that have been providing power for emergency disaster zones since the car’s original launch in 2011.

Nissan has partnerships with more than 60 local governments to support disaster relief efforts, as its EV models can act as mobile storage batteries thanks their bi-directional charging ability.

Helen Perry, head of electric passenger cars & infrastructure for Nissan in Europe, said: ‘Concepts like the Re-Leaf show the possible application of EVs in disaster management and demonstrate that smarter, cleaner technology can help save lives and provide greater resilience for the future.

‘Electric vehicles are emerging as one of the technologies that can improve resilience in the power sector. By having thousands of EVs available on standby, either as disaster-support vehicles or plugged into the network through Vehicle-to-Grid (V2G), they’re uniquely capable of creating a virtual power plant to maintain a supply of energy during a major outage.’

Dan Cooke, operations director at Serve On, the UK’s leading organisation providing emergency search and rescue in natural disasters around the world, added: ‘Looking back to previous scenarios we’ve dealt with, this technology could have made a real difference.

‘For example being able to power multiple filtration devices to produce thousands of litres of drinking water – essential in our line of work.’