Pandemic caused UK economy to shrink at fastest rate since 1921

The UK economy slumped at its fastest rate since 1921 last year, thanks to the pandemic forcing thousands of businesses to stay shut for months.

But the economy still looks set to avoid what could have been its first double-dip recession since the 1970s, after car sales contributed to a 1.2 per cent growth in December, despite severe restrictions across the UK.

A recession is two consecutive quarters showing the economy contracting, while a double-dip is two recessions within a short period of time.

Suren Thiru, head of economics at the British Chambers of Commerce, said: ‘Despite avoiding a double-dip recession, with output still well below pre-pandemic levels amid confirmation that 2020 was a historically bleak year for the UK economy, there is little to cheer in the latest data.’

All four sectors tracked by the ONS saw a fall in output, with the highest coming in the construction sector, which contracted by 12.5 per cent. 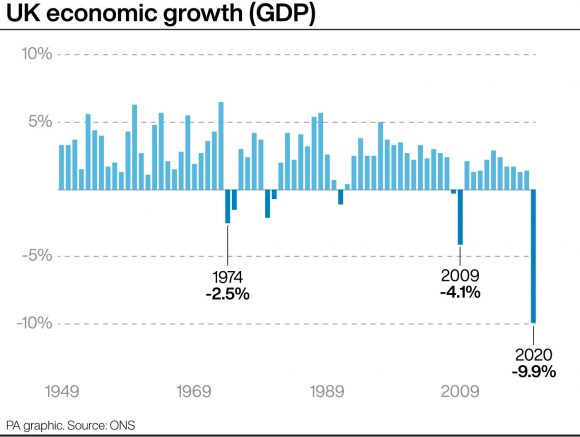 ONS deputy national statistician for economic statistics Jonathan Athow said: ‘Loosening of restrictions in many parts of the UK saw elements of the economy recover some lost ground in December, with hospitality, car sales and hairdressers all seeing growth.

‘An increase in Covid-19 testing and tracing also boosted output.

“The economy continued to grow in the fourth quarter as a whole, despite the additional restrictions in November.’

The economy was helped in December by lockdown restrictions that had been in place in parts of the country in November being eased.

The health sector grew by 2.4 per cent after being involved with running coronavirus testing and tracing schemes across the UK.

The 10 worst years for UK GDP

They’ve been doing it for Ben! TrustFord staff and supply partners raise £55,000 in virtual challenge