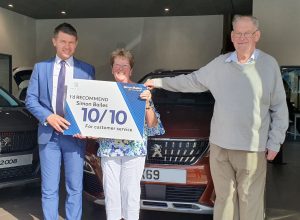 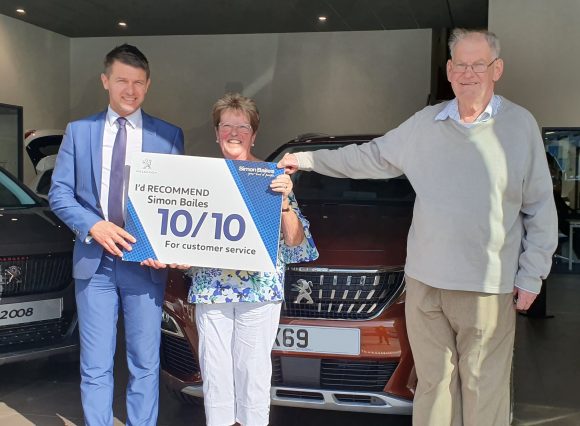 DEALERSHIP group Simon Bailes has hailed a pensioner as Peugeot’s most dedicated customer as she’s only ever owned cars by the marque throughout her 50 years on the road.

Elizabeth Hutchison’s love affair with Peugeot began in 1970 at the age of 17 when her father bought her a ‘small blue one’ – believed to have been a 204, the range’s most compact car at that time – after she passed her test.

Since then, the 67-year-old, of Thornaby, near Stockton, has lost count of how many she’s owned over the intervening half-century.

Between 1998 and now, she has bought nine new models ranging from a 207 to a 2008 in a variety of colours. Before that, she struggles to recall exactly how many Peugeots she has owned but recalls driving 405s and the 106.

‘I’ve always loved Peugeots ever since my father bought me my first one. They are just great cars. It’s hard for me to remember the exact number going back 50 years, but I do know I would never consider driving any other make.’

She and partner Peter Johnson, 71, have just taken delivery of a 69-plate Peugeot 3008 Allure from Simon Bailes Stockton – their fifth from that dealership.

Elizabeth, who grew up in Harrogate, North Yorkshire, recalls using her first Peugeot for short trips into town and to nearby Knaresborough. Since then, her longest journey has been to Scotland on holiday.

She mentioned her lifetime of dedication to the brand to chief executive Simon Bailes when she went to the dealership to collect her latest car.

He said: ‘I was completely taken aback, as it’s rare for anyone to have only bought one make of car over such a long period.

‘She has driven a variety of models over the years, and it is a tribute to Peugeot that she has never once considered switching to another manufacturer. In fact, Elizabeth may well be the most devoted Peugeot driver in the UK!’

Elizabeth and Peter are already planning a series of day trips to their beloved North York Moors, Scarborough, Whitby and York in the Allure. ‘Peugeot was my first car and it will definitely be my last,’ added Elizabeth. ‘People might think it’s a little odd, but I know what I like and I’m more than happy to stick with them.’