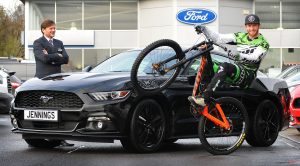 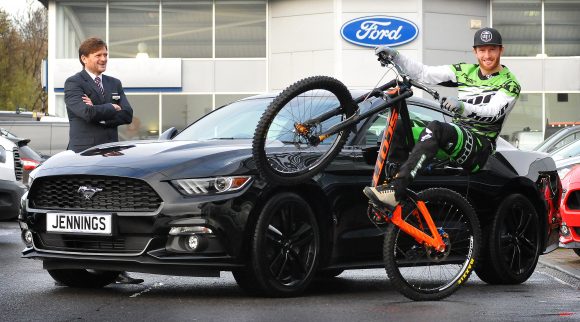 A PROFESSIONAL downhill mountain bike racer made a round trip of nearly 200 miles for his perfect four-wheel mode of transport.

Adam Brayton – who finished second in the British national series in 2017, 13th in the World Championships and 18th in the seven-race World Cup Series – travelled from Keswick in Cumbria to Jennings Ford in Middlesbrough, Teesside, to take delivery of his new Ford Mustang 2.3-litre EcoBoost Fastback.

It meant a journey of 182 miles, but that was no obstacle for the 28-year-old, who is used to conquering steep, rough terrain, not to mention jumps, drops and rock gardens. He said: ‘I’ve always had a passion for the Ford Mustang – I just had to find the specific model I wanted and a reputable motor dealer who I could trust to deliver the goods.

‘I’m delighted with the car, as well as the extremely high level of customer service I’ve received from the dedicated team at Jennings. They’ve been extremely professional from the first point of contact and throughout the entire purchasing process.’

General sales manager Colin Massey, who presented Brayton with the key to his powerful and dynamic Mustang, said: ‘It was an absolute pleasure dealing with Adam. I don’t think we’ve ever sold a car to a professional downhill mountain biker. He is extremely passionate about the sport, and placing 13th in the World Championships is a phenomenal achievement.

“On behalf of Jennings Ford, I would like to wish Adam many more years of success, as well as many years of happy motoring in his new Ford Mustang.’

The ultra-modern Ford Mustang Fastback model has a long bonnet flowing downwards to reduce drag plus distinctive headlamp and rear light designs, along with other signature features, in addition to the latest technologies.

Pictured are Colin Massey, left, with Adam Brayton and his new Ford Mustang at Jennings Ford

MORE: More than 1,000 Mustang fans take delivery of their cars

On WorkshopMagazine.co.uk: Extra muscle for Mustang after 3D puzzle arrives from the USA