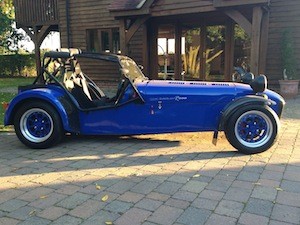 THIS little beauty has only 2,000 miles on the clock, says Sophie Williamson-Stothert.

Caterham cars have always been the ultimate driver’s car, with their signature vintage looks and top-class driveability hot-wired into each model’s DNA. That’s certainly the case with this one-of-a-kind Caterham R500.

It’s quite simply like looking for a needle in a haystack when it comes to finding a one-off Caterham, and it’s not every day you spot a fully race-prepped conversion. With its monstrous performance and background of motorsport heritage, this little track-day adrenaline pumper is definitely unique, and that’s pretty self-explanatory in its number plate: R1 WOW.

This R500 conformed to the brand’s selling methods of giving its buyers the opportunity to buy it ready-built or packaged up and ready to piece together themselves, but actually this little car has no ordinary background, nor has it ever been an ordinary Caterham.

Currently for sale at Newmans in Southampton, this R500 machine is possibly one of the only racing Caterham R500s left in the UK. The car was originally built by David Ketteridge of Taylors Foundry Motorsport back in 1999, who put together a number of championship winning cars, which competed in the Powertrain Caterham R400 Challenge. He himself is known as ‘one of the best builders there has ever been’, says Newmans.

The Challenge’s sponsor, Taran Microsystems, adored the little cars so much, it asked Ketteridge to build a Caterham to the same spec as the racing cars, but this time with even more power.

Enter the R500. ‘The owner of Taran Microsystems asked David Ketteridge to build him a car that was similar to the racing cars and he’s kept it locked in the garage ever since,’ says Guy Foster of Newmans. ‘It’s only got 2,000 miles on the clock!’

This R500, finished in metallic blue, features a number of extras in comparison to a standard car, ultimately turning it into a fully- fledged race car. This is mostly due to its Minister Racing Engine upgrade that produces 243bhp.

‘It’s a very extreme car for the road,’ says Foster. ‘It produces 500bhp per tonne and that’s pushing the boundaries of motorbike performance on four wheels.’

Ensuring this track-car toy is comfortable on the road, it has a full race-approved roll cage, a full windscreen and reinforced floor pans. ‘It’s the same spec as a Taran racer, but to make sure it’s comfortable when it’s used on the road and to provide safety, it has a full screen instead of an aero shield and a full roll cage for protection,’ explains Foster.

It certainly looks the business too, with its carbon-fibre theme covering the nose cone, front and rear wings, dashboard and exterior mirrors, which also contribute to making this little car one of the lightest on the road, weighing just 490kg. It sits on three-piece magnesium light alloy wheels, is finished with black powder-coated interior and engine bay, and drivers will be strapped tightly into Tillet-manufactured race seats with a four-point harness.

‘This little car is definitely one of a kind and it’s been kept locked away in the owner’s garage since it was built,’ says Foster. ‘It’s definitely a playtime car and worth a lot of money, with a retail price of £29,995.’