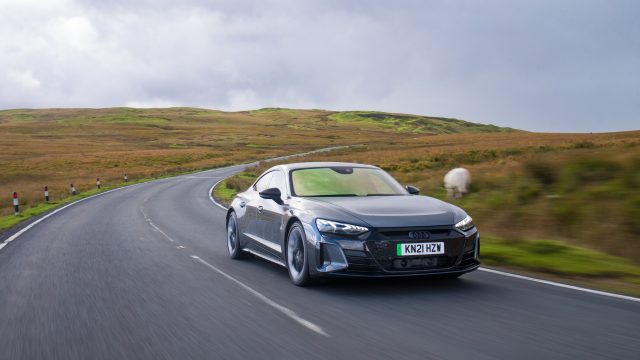 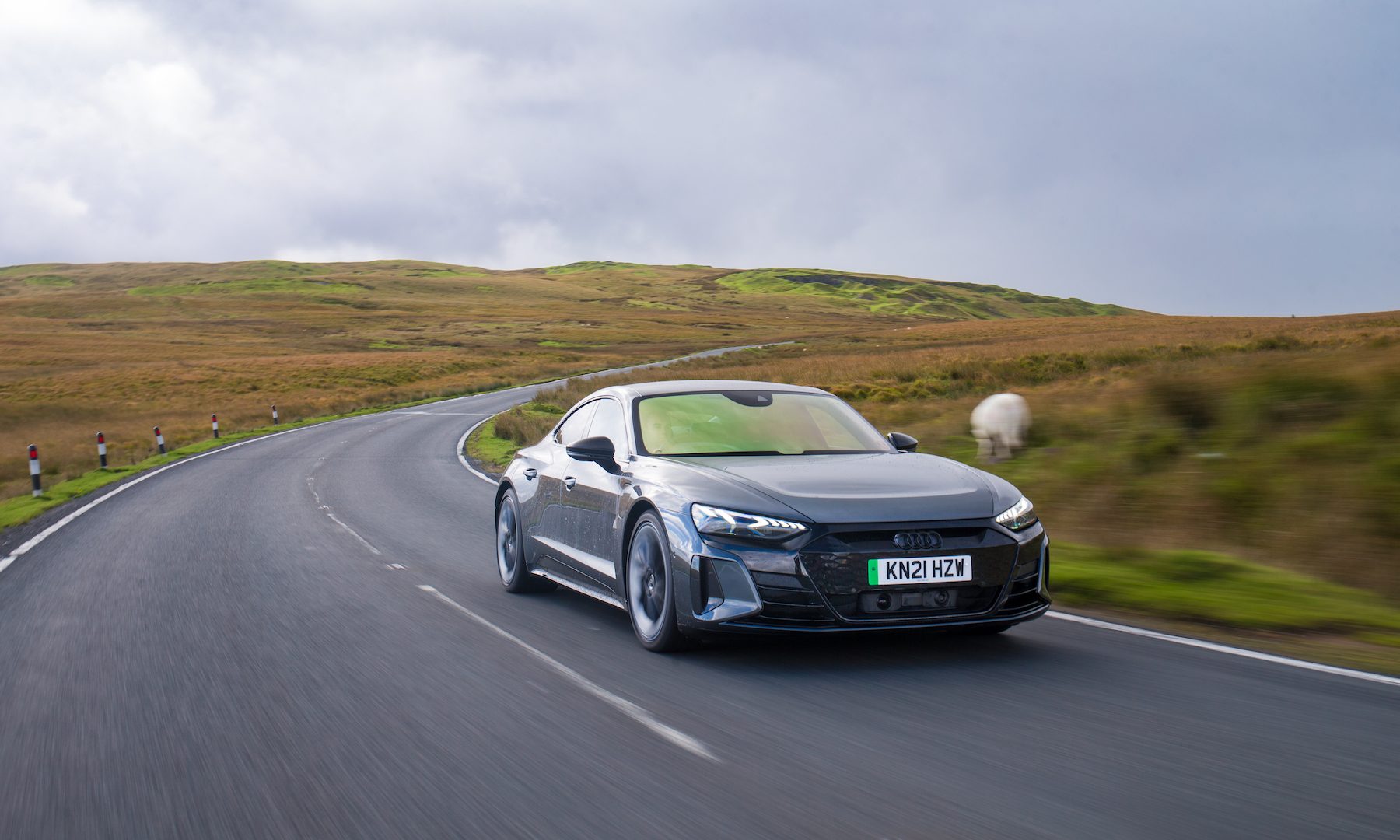 If you’ve not seen it yet, there’s a new show written by Steve Martin that you can watch on Disney+ called Only Murders In The Building. What’s that got to do with the new Audi RS e-tron GT? One is a comedy drama about a group of strangers who decide to solve crime and make a podcast about it, the other is an exceptionally fast electric car, but they have one thing in common.

Without spoiling any of the plotline, there’s one episode that is filmed from the perspective of Theo, a deaf character, and – having watched this after driving the e-tron – I thought you can really see what a difference sound makes to our lives.

Driving the e-tron around Wales, there is sadly something missing. However, I think there’s a really big ‘but’ that has to be mentioned, because driving this back to back with the 911 GT3 is so cruel, going from an orchestra being pushed to its limits in one car to a vehicle that feels as though it has every other characteristic of an exceptional sportscar but a solo flautist is nervously playing its tune.

I could rattle through the spec sheet and tell you it will do 0-60mph in 3.3 seconds and 475kW at peak performance, which works out at nearly 640bhp, but really you want to know what that feels like on the road. 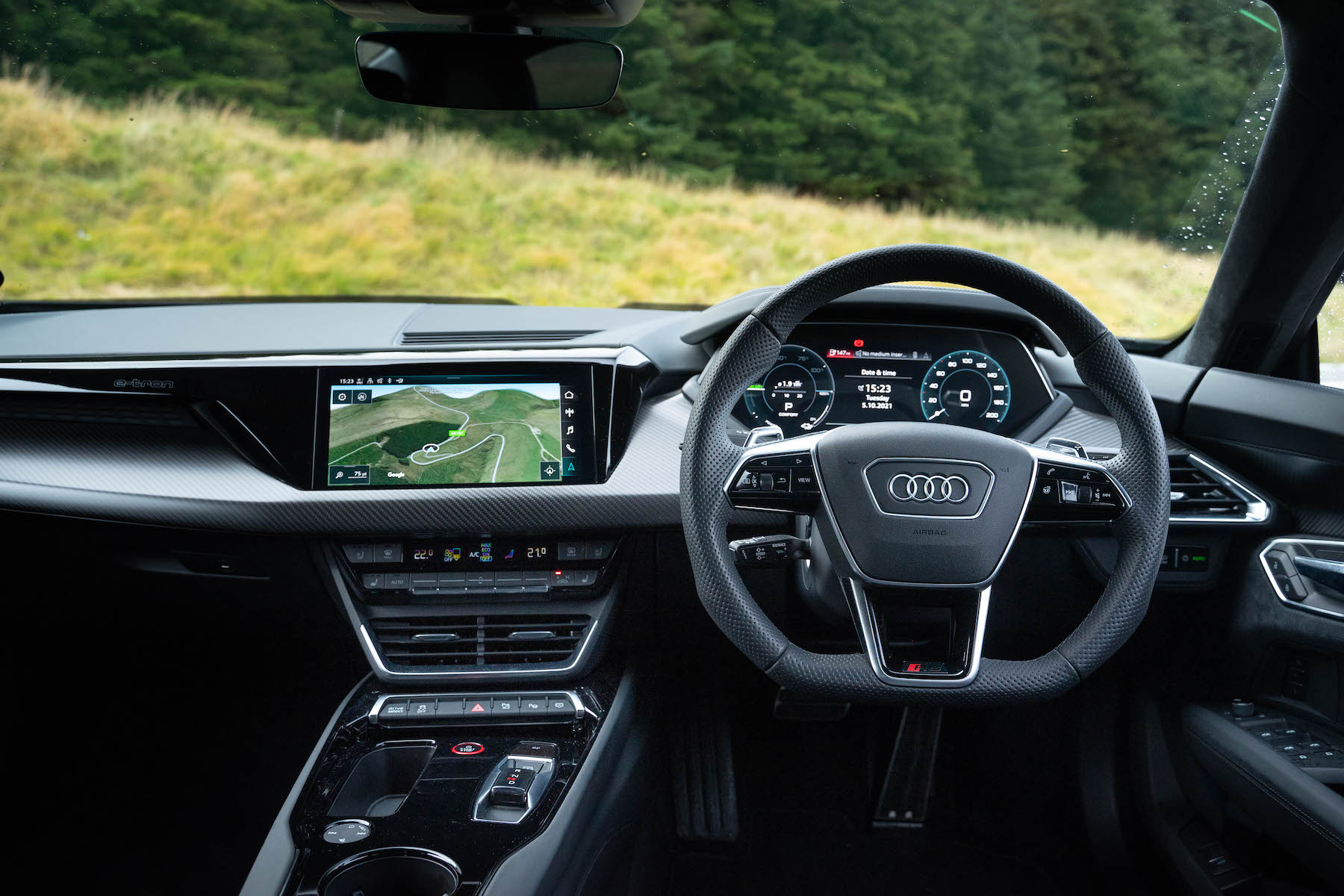 There’s no denying that this car is good. In fact, it’s very, very good. Its problem is it’s a shock to the system for petrolheads. Sit them in a Tesla with its toy car looks and send them to 100mph in seconds and it’s a novelty; sit them in the cockpit of a car that could easily be mistaken for one in an R8 and you’ll find them fiddling with the speakers trying to work out where the sound has gone.

This is a car that feels precise but dangerous at the same time. It’s never really out of control but also feels like it might kill you when you put your foot down and the power is delivered so directly.

Sadly, this is a car that has me really torn. If we start from the outside, it looks so good. Electric cars shouldn’t look out of place if they were driven in Tron – and the e-tron GT is just that. It looks enough like a traditional Audi while also having its own unique style. 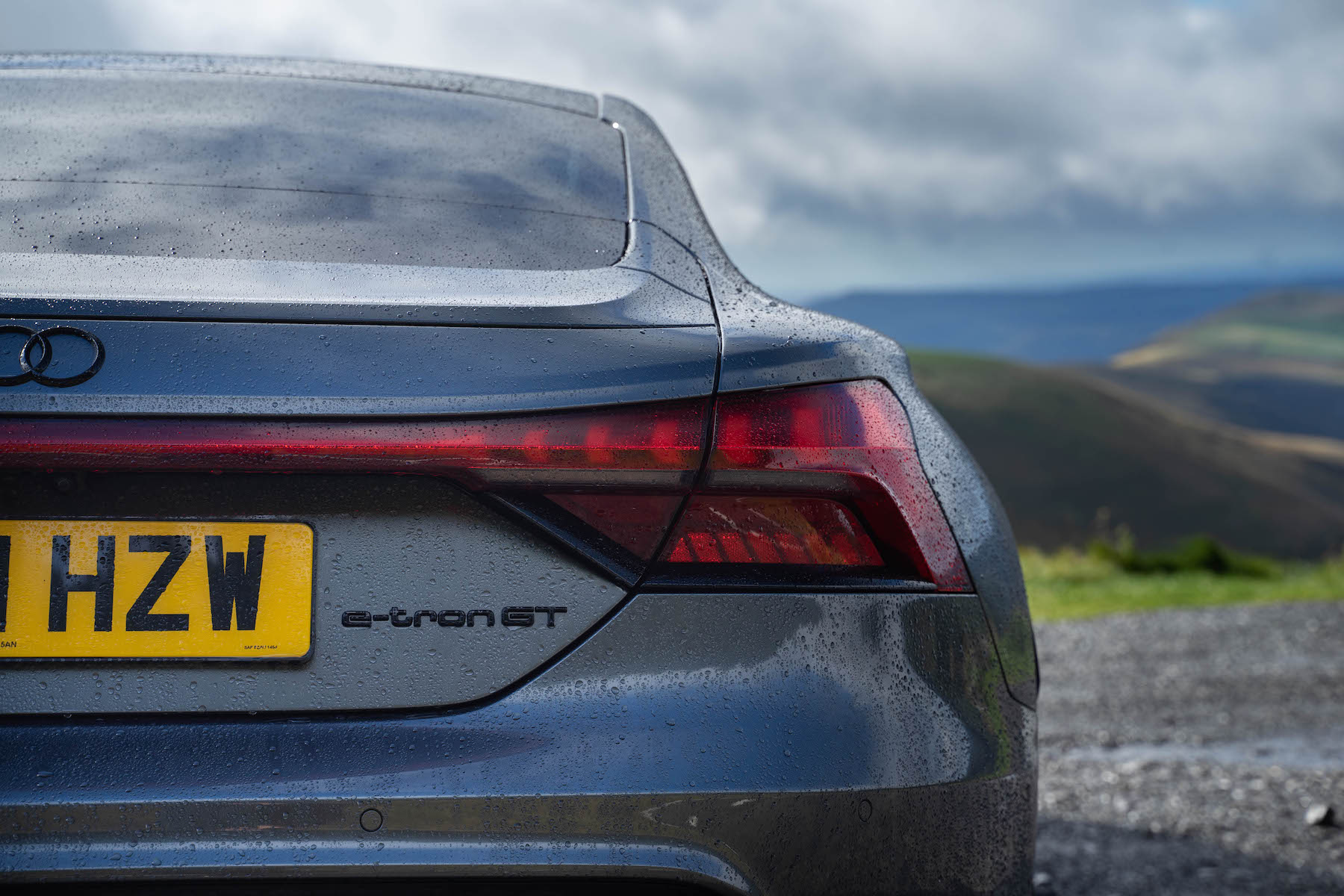 The interior isn’t so wild but it’s a formula that works, and why would you want to mess with that? You’re sitting in control of this small, nimble and powerful machine, and that wills you to put your foot down.

You want to cling on for dear life as the engine roars and you jump your way through the gears with the vibrations rumbling through your back and all through your arms. But you don’t get that. You do get the clinging on for dear life, but instead it’s as you drop your foot and the power is so instant that even I think I’m not sure how long I can hold this as it keeps soaring down the road. 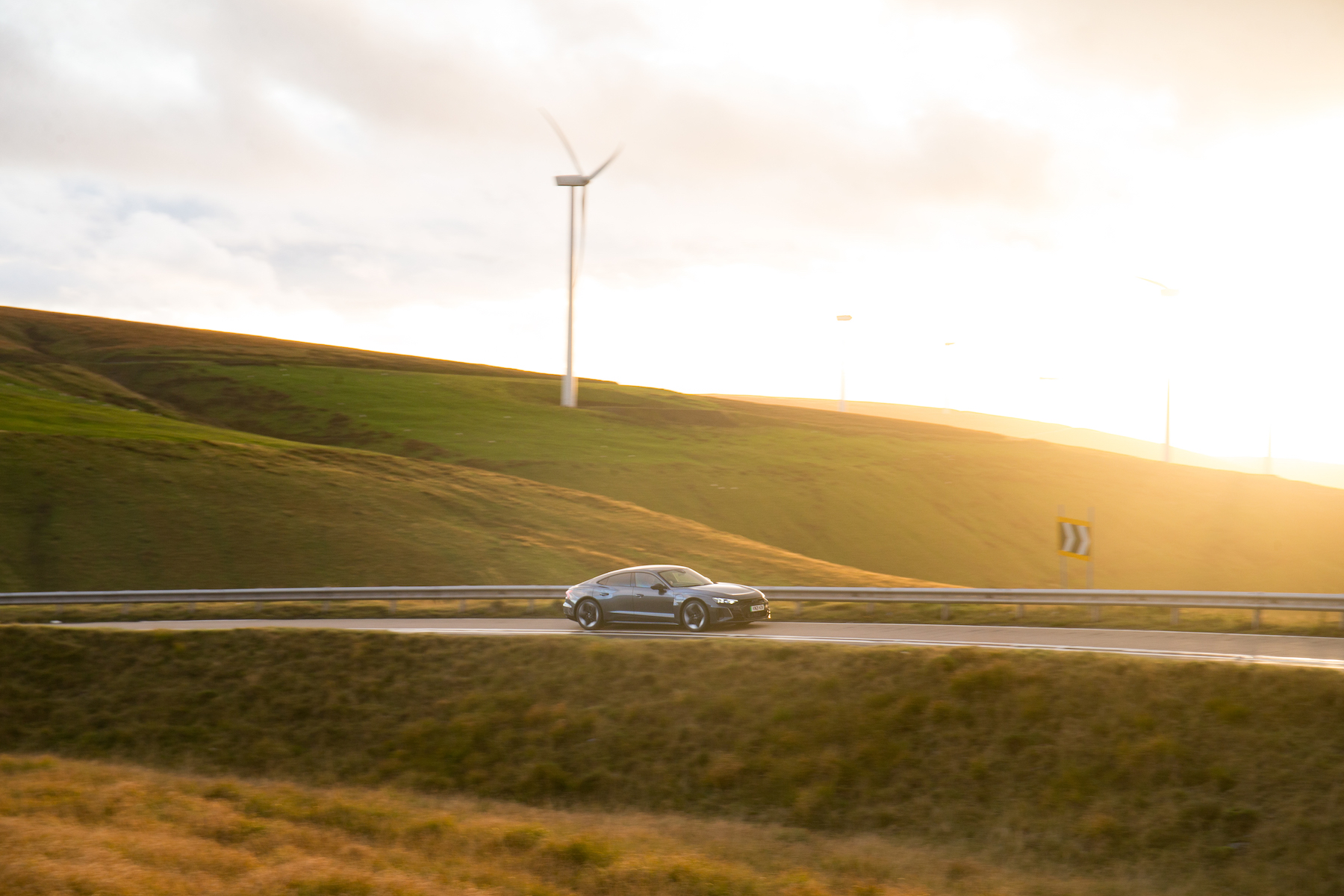 Maybe it’s we who need reprogramming. During our road test, I found myself thinking is the sound really the problem or is it something else? However, it’s really hard to fault anything on the e-tron. It’s precise in so many ways – from how it corners, to its poise on the road. It feels perfectly balanced, and when you reach a long, weaving section of road it’s hard to imagine wanting to be behind the wheel of anything else as the e-tron slices through the hills.

Its problems, for me, are far more about what this car isn’t. It lacks emotion, which is more than just noise from the engine – it’s the whole experience that you buy into when you’re spending this sort of money on a sports car. 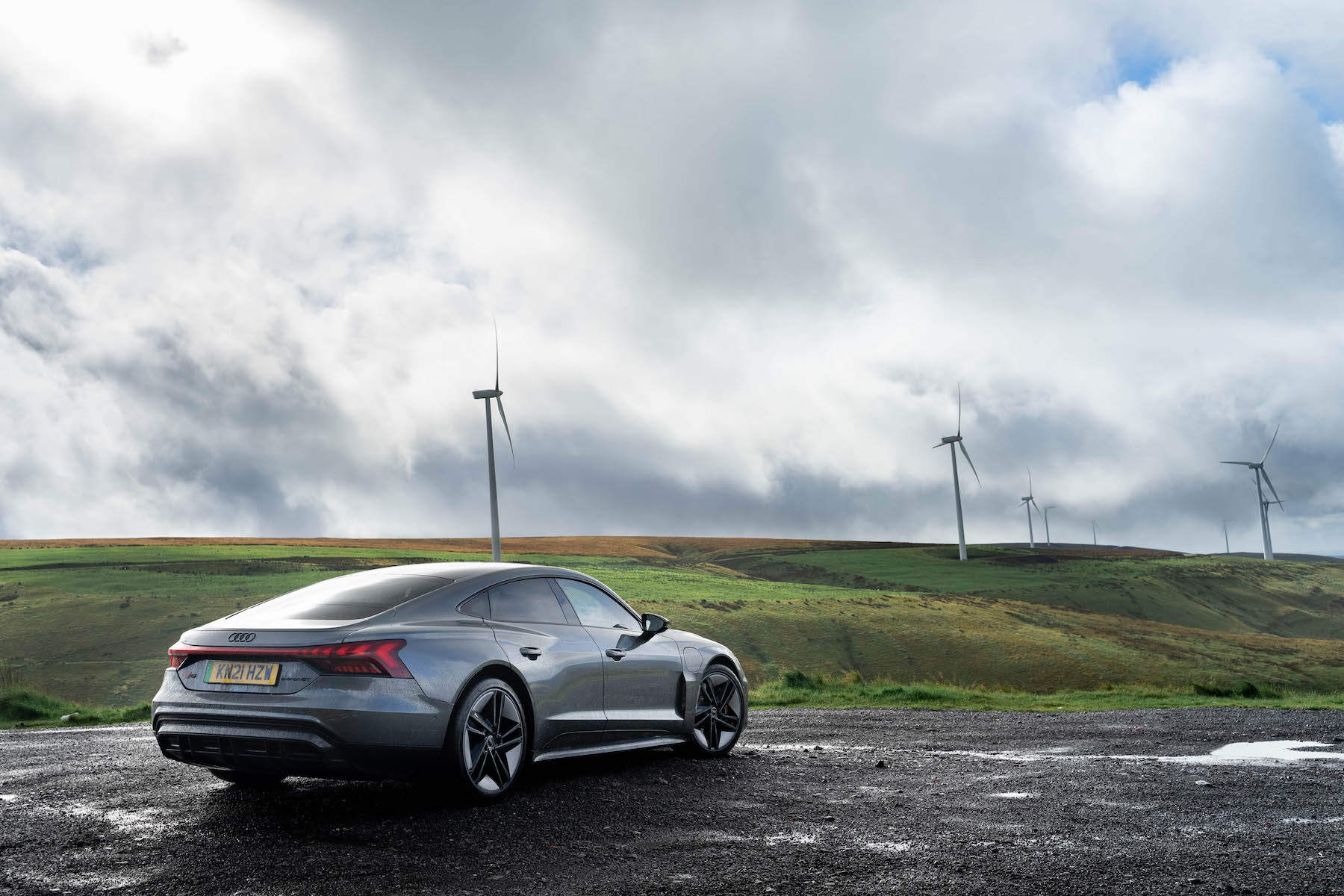 It’s the fact that everything has got a little bit too technical and political with electric cars, and the thought of what this car could have been, rather than a filler on the Audi line-up.

It sits neatly between a TT and an R8’s specifications, and while we all know it’s a Taycan, it’s not allowed to be as good as one. Not to mention the RS is the full-blooded version of the e-tron GT but it sadly doesn’t feel worthy of wearing that badge when you compare it to conventionally fuelled RS models. So, sorry e-tron, it’s not going to work out, but in this case I really do think it’s me and not you.