It’s funny what combinations of numbers and letters will do, isn’t it? MI6, and you instantly think of James Bond. Seven-four-seven, and it’s the Boeing plane that formed a backbone to the aviation industry. And then there’s another one – GT3.

Because for many years now, those three little characters have invoked such a reaction among motoring enthusiasts that you’d think they’d be associated with something near-Biblical.

However, rather than signifying a date, they’ve always come to represent one of the most respected Porsche models in the business.

2021 marked the arrival of a new one. Making its debut on this latest 992-generation 911 platform, the GT3 now has more performance than before and, according to Porsche, even better handling than the car it replaces. And that was certainly no wet flannel in the bends.

So what have we got to play with in this latest GT3 as it takes on the soggy, puddle-strewn roads of south Wales? 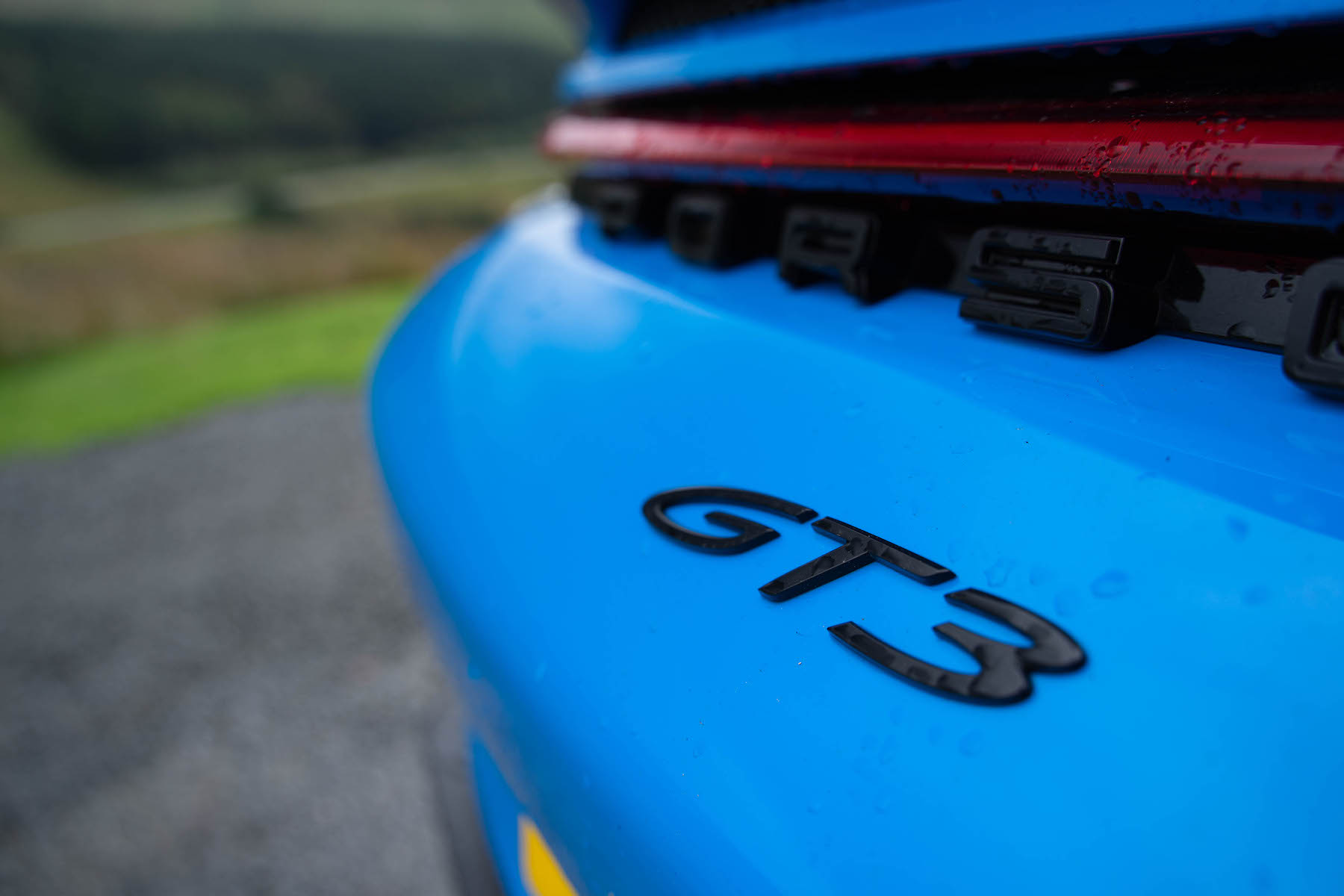 At the rear of the car sits a 4.0-litre ‘Boxer’ engine, bringing 503bhp. It’s derived from the engine you’ll find in the 911 GT3 R endurance racer, too, so a top speed of 199mph – with the six-speed manual we’ve got here – is to be expected. Zero to 60mph? Three point seven seconds. You’d be slightly quicker with the PDK automatic, but who cares when you’ve got three pedals and one of the most glorious shifters in the business – more on that later.

Almost immediately, the bewinged GT3 lets us know that it’s not a car for mucking around in. Entering a national speed limit road, we gingerly approach the throttle. As the engine starts to become a little more vocal, the revs flare as the rear tyres lose traction – in fourth gear. A handful? On wet Welsh roads, you’d better believe it. 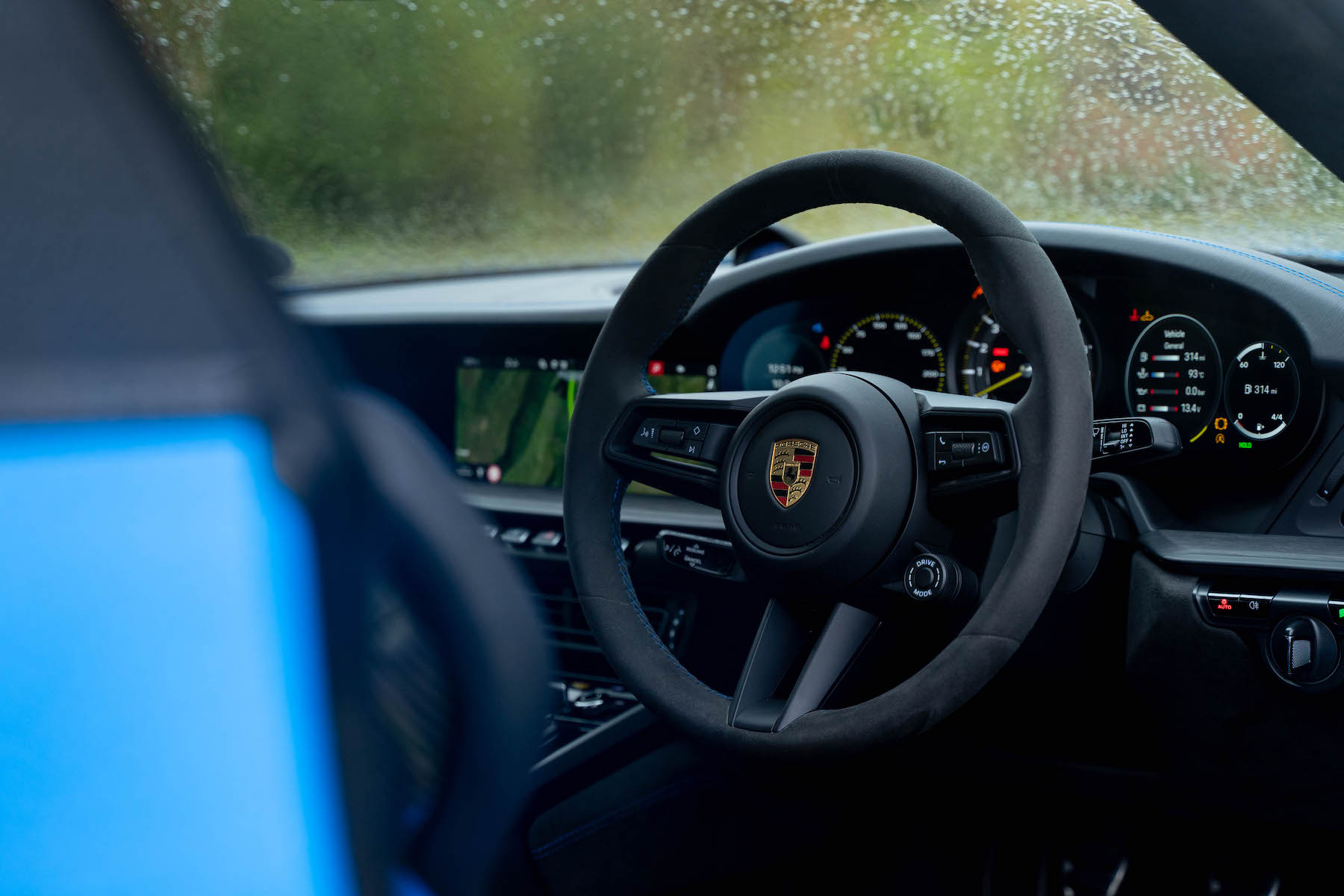 But driven smartly the GT3 will find grip. The front end of the car is razor-sharp and turning in, you can guide it through the bends as it searches out traction like a sniffer dog at an airport. So, despite the torrents of rainwater streaking down the roads outside Brecon, the GT3 requires caution but there’s pace to be found should you want it.

Of course, the PDK would be quicker. Let’s be honest now. Although motoring enthusiasts often bemoan the dying art of the manual gearbox, you can’t ignore that, for many people, the auto ’box is simply the better choice. They’re easier to live with, far more pleasant in traffic, and in the GT3’s case actually makes it faster-accelerating. 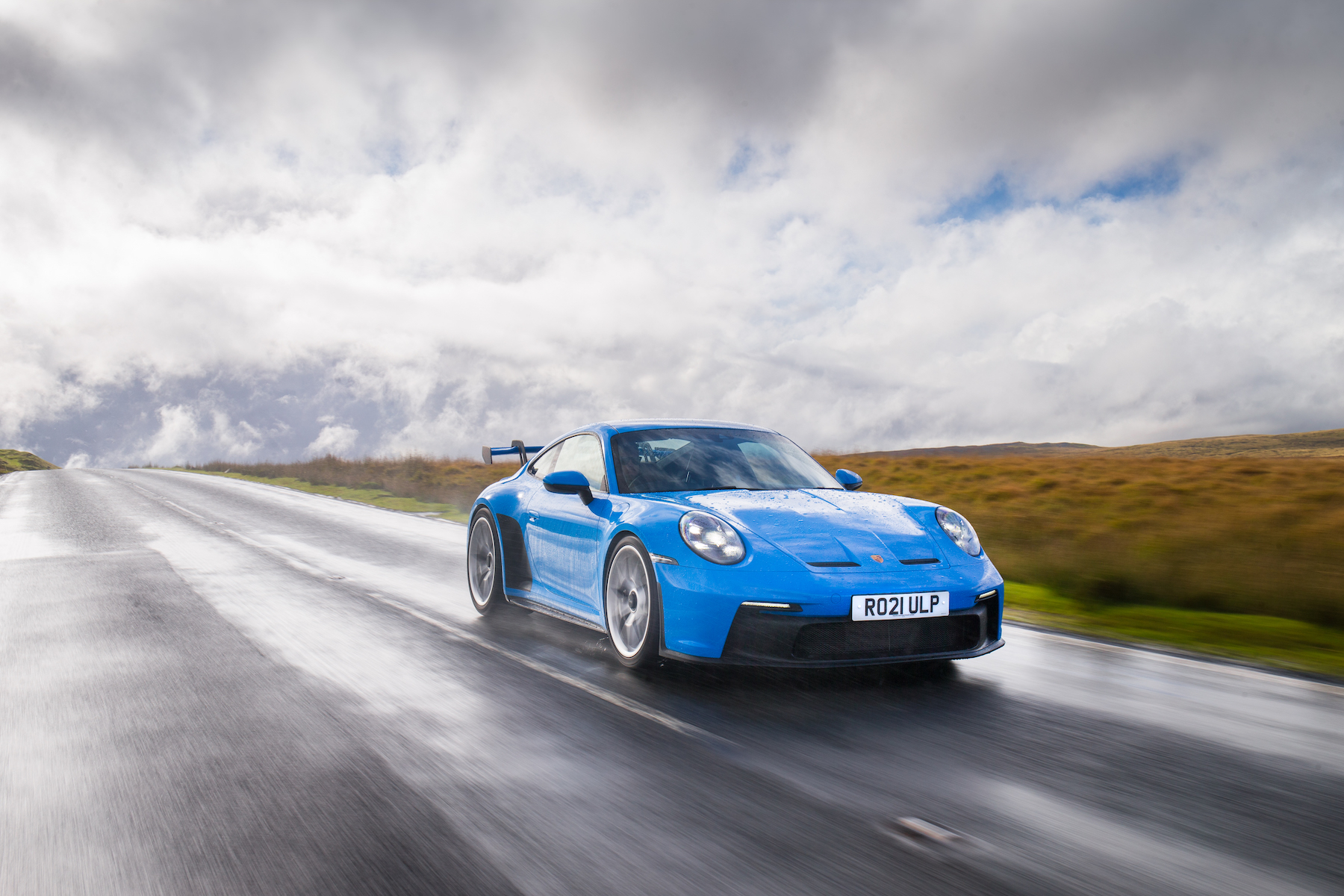 But in a car such as this Porsche, a six-speed manual takes the whole experience to another level. It’d be detrimental to the car if this was some woolly gearshift, but its precision and mechanical joyfulness is something to behold. It is, in classic Porsche fashion, quite long-geared, but you learn to lean on it and allow the engine to build to its stratospheric 9,000rpm redline.

It’s even comfortable to live with. All right, the low-speed ride isn’t going to be giving a Mercedes S-Class any scares, but the damping is so well executed that as you gather speed it really does skim out the road ahead of you. The ability to lift the nose is a life-saver as we enter and leave a variety of ragged-surfaced car parks, too. There’s no avoiding the gravel as it plinks into the GT3’s wheel arches, mind.

The seats are low-slung and supportive, while the level of fit-and-finish you get is excellent. There’s Alcantara used aplenty, meeting leather and metal in one impressive cocktail. The general seating position is absolutely spot on; you can get the steering wheel nice and close to your chest, while its thin-rimmed design feels more like wheel designs of old. It’s great to use. 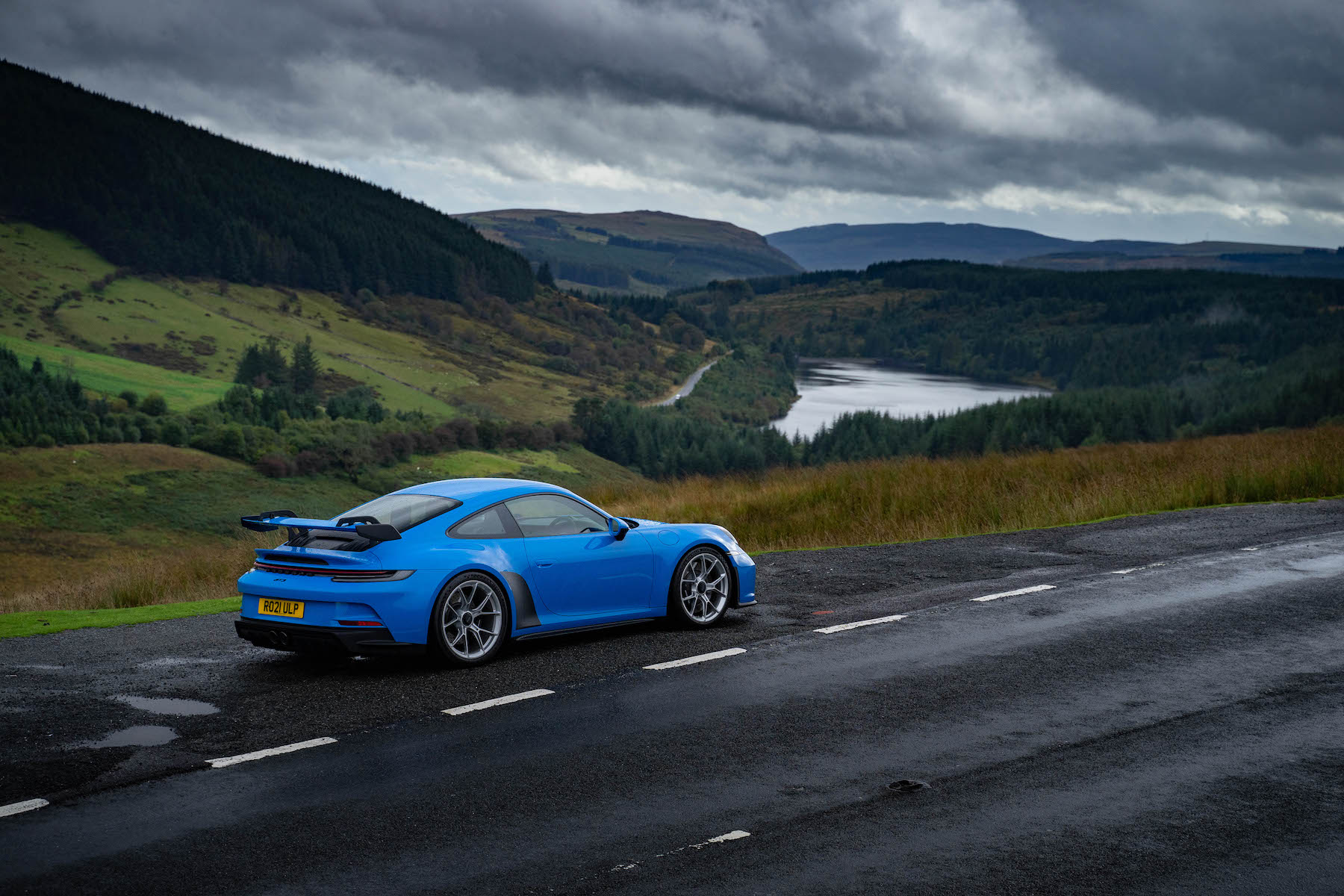 This is a car you just don’t get tired of driving. Sitting before you with its huge arches – it’s wider than the previous-generation car – it feels like a proper event before you’ve even turned the engine over. Finished in Shark Blue, it’s a car that never fails to turn heads and brightens up the dreary weather we drive through.

It’s far more about how it drives than how it looks, though. Each aspect of the driving experience feels honed, sharp and expertly judged. The pedal weights – and spacing – are pin-sharp, while the steering’s accuracy enables it to dart through the bends, but it’s not overly burdened with weight, either.

Sure, we might opt for the more undercover Touring model, lopping off the GT3’s rear wing for a car that’ll create some excitement for those in the know and pass under the radar of those who aren’t, but there are many who would rather have this sporting Porsche in all its big-wing glory.

It’s almost a reason to be sad. This car is so good, so accomplished and so wonderfully well rounded that you can’t understand how it can be improved. Of course, Porsche will always find a way to push things further, but for now, this feels as good as it can get.