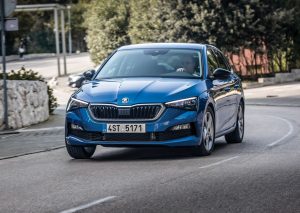 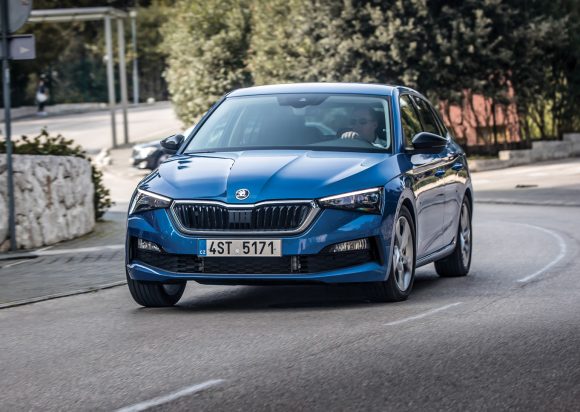 The Volkswagen Group is pretty good at churning out some of the best family hatchbacks in the business. Volkswagen has its Golf, Seat its Leon and Audi its A3. But where does Skoda fit in?

Well, now we have this – the all-new Scala. Offering class-leading practicality, a well-built interior, loads of standard equipment and an affordable price tag, it could help get Skoda back into the minds of family hatchback buyers.

Taking advantage of the MQB platform used across Volkswagen’s family of brands, the Scala is essentially an all-new model and a vast distance apart from the Rapid, even if Skoda is keen to point out that it doesn’t ‘replace’ that model.

Aside from introducing a new style language, the Scala’s key improvement is the cabin, where a touchscreen size of up to 9.2 inches is offered alongside a 10.25-inch digital virtual cockpit, which are both some of the largest screens in this class. The VW Group’s latest MIB3 infotainment package is also offered, which boasts a host of new connectivity services.

There are no surprises when it comes to powertrains, with the Scala being offered with three of the Volkswagen Group’s staple engines. The 1.0-litre petrol engine is expected to account for the majority of sales – particularly in its 113bhp guise, which is the car we tested.

The three-cylinder turbocharged unit is willing and – despite its modest power output – still able to accelerate the Scala to 60mph in under 10 seconds, and keep it going on to a top speed of 125mph.

An 84bhp 1.0-litre unit and a 148bhp 1.5-litre engine round off  the petrol line-up. A diesel unit is also offered, which delivers 113bhp and comes with the  option of a manual or DSG automatic transmission.

Expect the Scala to offer the same level of thrills as the Ford Focus and buyers will come away disappointed – however, it’s ideal for those in the market for a comfortable cruiser.

The Scala is a refined car under steady acceleration and delivers one of the most accommodating rides in its class. Larger alloy wheels don’t affect the ride quality either. An optional ‘Sport’ mode is offered, although we don’t see the need to ever use it.

Skoda has gone down a slightly different path with the Scala’s styling and it’s a direction that’s worked. But sure, it’s still immediately recognisable as a Skoda with its high bonnet line, flowing lines and hexagon-shaped grille.

Our only real gripe about the way the Scala looks, as with many new models, is that the radar sensors for the suite of safety features are poorly integrated into the design behind the front grille. It looks untidy.

The Scala undercuts the best-selling Golf in terms of price by quite some margin but its interior doesn’t feel that way. Skoda’s rounded off the cabin with plenty of soft-touch plastics and it looks like a model that occupies a more premium sector than it does.

The range kicks off at £16,595, or roughly the same as a mid-spec supermini these days. And despite its cheap price, plenty of kit is still offered as standard.

Gone are the plastic wheel trims you would typically find on the entry-level ‘S’ version, and instead it comes with 16-inch alloys, as well as a 6.5-inch touchscreen, LED headlights and autonomous emergency braking. Splashing out an extra £1,185 pays for the SE, which adds even more kit.

Rounding off the range is the SE L, which costs from £19,580. This brings treats such as keyless entry, climate control, a digital ‘virtual’ cockpit and a large 9.2-inch touchscreen with satellite navigation and connected services.

Top Gear described the Scala as a ‘nicely judged hatchback’. Evo said: ‘The infotainment is quick-witted, simple and clear.’

The Scala is everything we’ve come to expect from a modern Skoda. It’s good to look at, hugely practical, comfortable, and the firm’s long-lasting principle of value remains.