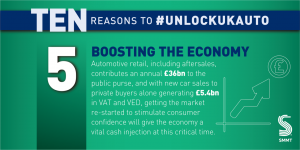 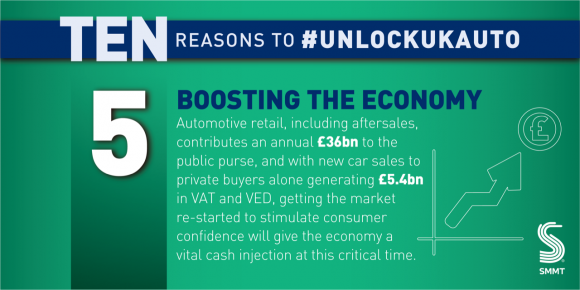 New car showrooms must reopen as a matter of urgency, the SMMT said today (May 22) as it revealed that their ongoing closure was costing the Treasury £61m a day.

The annual income from VAT, vehicle excise duty and other taxes on new car sales to private buyers is in the region of £5.4bn, said the trade body.

But according to its calculations, by the end of May the lockdown restrictions that forced the country’s 4,900-strong network of new car showrooms to shut up shop will have reduced that figure by 23 per cent, with every day of closure costing £20m.

Furloughing the retail sector’s 590,000 workers was, it said, also costing an estimated £41m a day – the figure is based on an assumed 80 per cent of the UK’s auto retail workforce furloughed under the Coronavirus Job Retention Scheme at 80 per cent of their wage, and the average sector wage.

If retailers could begin bringing staff back to work, though, that bill could be cut, said the SMMT.

It is hoped that dealers will be allowed to reopen on June 1 with other non-essential retail – but so far no one knows for sure, including the SMMT.

Chief executive Mike Hawes said: ‘Government measures to support the critical automotive industry during the crisis have provided an essential lifeline, and the sector is now ready to return to work to help the UK rebuild.

‘Car showrooms, just like garden centres, are spacious and can accommodate social distancing easily, making them some of the UK’s safest retail premises.

‘Allowing dealers to get back to business will help stimulate consumer confidence and unlock recovery of the wider industry, boosting tax revenue and reducing the burden on government spending.

‘Unlike many other retail sectors, car sales act as the engine for manufacturing, and reopening showrooms is an easy and relatively safe next step to help get the economy restarted.

‘With every day of closure another day of lost income for the industry and Treasury, we see no reason for delay.’

As reported by Car Dealer, the new car market fell by 97.3 per cent in April.

But the SMMT said that as the UK returned to work, getting the new car market moving again would help ease pressure on public transport, kickstart the economy and boost the UK’s £82bn automotive manufacturing sector, which, according to an independent forecast by Auto Analysis, has already been hit by losses of more than £8bn.

The SMMT has simultaneously launched a social media campaign citing 10 benefits of letting dealerships reopen. Using the hashtag #unlockukauto, they range from customer demand and accelerating fleet renewal to supporting jobs as well as the economic boost.

Guide: Everything dealers need to know about safely reopening

More: Official – New car sales down 97.3 per cent in April