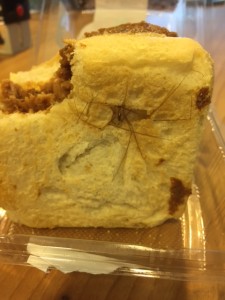 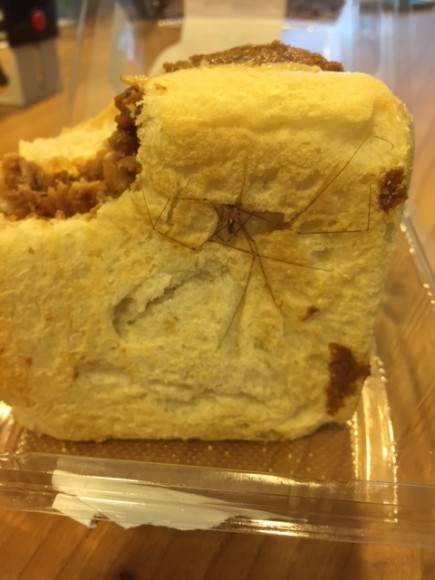 Snack shock for salesman Chris – a sandwich with added spider!

A CAR dealer got the shock of his life when he bit into a shop-bought pulled pork roll and found that a huge dead spider had been baked into it.

Chris Eastwood, sales specialist at Lexus Bolton, bought the snack from a branch of Greenhalgh’s bakery in Bury Road, near the showroom.

He has now pledged never to return there, even though the company sent him £5 of vouchers by way of an apology.

Chris, who lives in Warrington, told Car Dealer: ‘It all happened on August 1, I’d just popped out for lunch on the Saturday afternoon.

‘I was enjoying the sandwich and happened to turn it over – then I noticed that a spider had actually been baked into it. I was disgusted and it made me sick. I couldn’t believe it. Everyone was asking me what was wrong but I couldn’t speak.

‘Spiders are the one thing that I am terrified of.’

Chris, 29, called the bakery after making the dreadful discovery. A member of staff came to collect the £2.99 snack – after which, Chris was sent the vouchers.

But he says he feels disappointed with the way he has been treated, and added that a £5 voucher to spend in a bakery he doesn’t want to visit again ‘is not really any use to me’.

Sandra Ogden, head of retail operations for Greenhalgh’s, told the Daily Mail a full and thorough investigation had been carried out and that the company had sent its ‘deepest apologies’.

She added: ‘No system is 100 per cent foolproof. Even though we aim at a 100 per cent success rate, in excess of one million items are produced at our bakery each week and we sometimes fall short of the perfect standard.’

MORE: Discovery Sport is the most wanted used car on forecourts

MORE: James Baggott: What goes on in car buyers’ heads?

On SuperUnleaded.com: Fancy a job on (not) Top Gear?