Watch: Sony’s Vision-S concept car takes to the road and shows off interior for first time

Sony has taken one more step towards making its electric car concept a reality with a prototype taking to the road for testing.

In new footage released by the tech manufacturer, Sony’s Vision-S concept car has been shown undergoing dynamic testing for the first time on roads in Austria.

The car was first unveiled at last year’s CES technology exhibition and this year is back with a camouflage wrap in order to disguise some of the car’s exterior styling elements.

Previous tech firms that dabbled with electric cars include Apple which canned then rebooted its Apple iCar project while famously Dyson axed its electric car project at the 11th hour.

Sony is using the Vision-S as a way of showcasing its future plans for autonomous and high-tech driving. 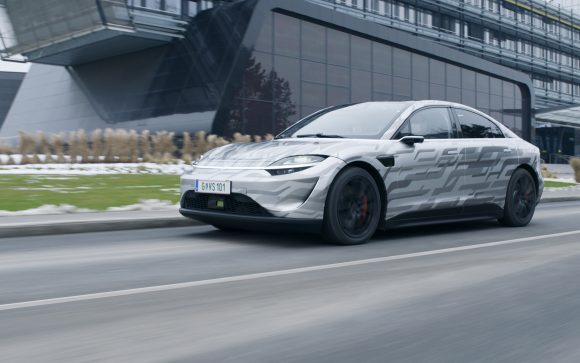 Featuring 33 sensors, it is able to monitor its surroundings, as well as boasting artificial intelligence technology which allows it to detect and recognise people.

This system enables the car to determine how tired the driver is and it can even adjust the temperature of the cabin by ‘inferring the condition of the occupants based on behaviour read from the ToF (time of flight) sensor’. A ToF sensor uses infrared light to assess depth.

The footage – which you can watch above – gives a clear look at the car’s interior for the first time, too.

It shows an ultra-wide central screen with a variety of different menus, as well as a secondary high-definition display ahead of the passenger.

The main infotainment setup appears to give access to key functions such as media and satellite navigation.

There’s also another display fitted in front of the driver which shows satellite navigation functions, too.

Though further details about the concept are few and far between, Sony has disclosed that it’ll be powered by a dual electric motor setup with 268bhp.