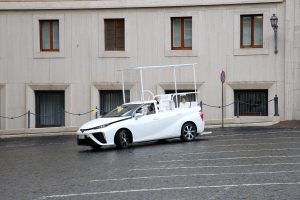 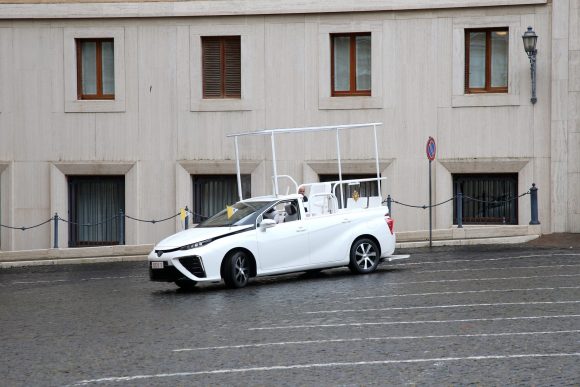 Pope Francis has been given the gift of a specially adapted, hydrogen-powered Toyota Mirai ‘Popemobile’.

The car is one of two which were specifically made by Toyota and were donated to the Catholic Bishops’ Conference of Japan when the pope visited the country in November last year.

Totalling 5.1 meters in length and 2.7 meters in height, the Mirai uses a hydrogen fuel cell system which results in completely zero-emissions propulsion.

The only end product, in fact, is water. However, it is capable of returning up to 310 miles of range per tank of hydrogen. 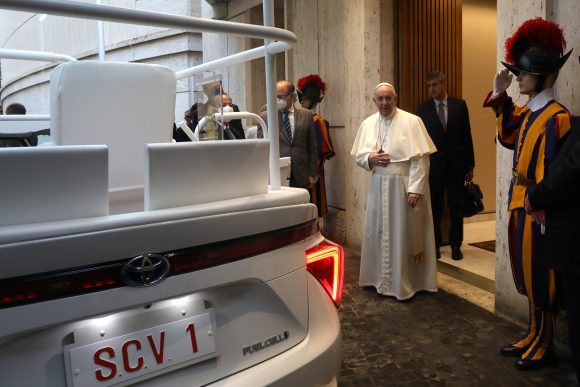 Fitted with a special ‘roof’, the vehicle allows the pope to stand and be seen by those around him.

The handover was conducted during a ceremony attended by Rev. Father Domenico Marokot Wada, representing the Catholic Bishops’ Conference of Japan and a delegation of six Toyota representatives, including senior vice president of Toyota Motor Europe Miguel Fonseca.

Though this latest car follows in a long line of specially-adapted popemobiles, it’s one of the most eco-conscious yet, tying in with the Pope’s vision for a cleaner environmental future.