Home > News > It’s no trick – customer gets a treat and wins a new VW Take-up!

It’s no trick – customer gets a treat and wins a new VW Take-up! 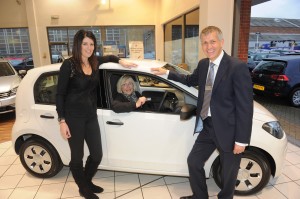 A LUCKY motorist couldn’t believe her luck after winning a new car in a prize draw by the Inchcape Volkswagen Group.

Jackie, from Hampton, said: ‘I found out I’d won while I was out in fancy dress trick or treating.’

Volkswagen Twickenham was one of 20 Inchcape UK Volkswagen retail centres nationwide to launch the competition, with customers who bought a new Volkswagen car throughout August and September automatically entered into the prize draw to win the Take up!

Jackie, 46, said she will be giving her the new car to her mother, Jenny Saul.