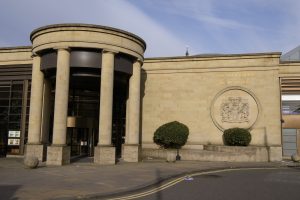 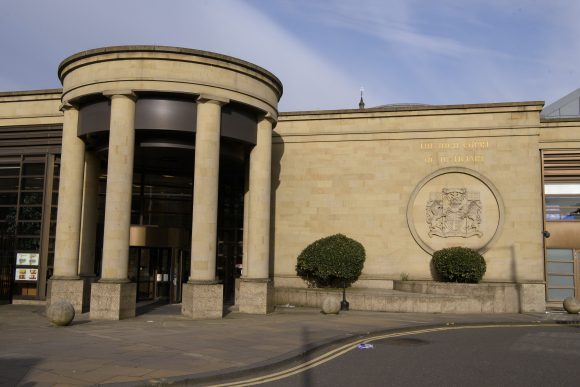 TWO men who repeatedly shot a car dealer were jailed today for his attempted murder.

Convicted murderer John Docherty and Don Templeton, from Johnstone, shot James McGurk, 42, from behind at Crosslee Poultry Farm, Bridge of Weir, in October 2017.

Docherty, 47, and Templeton, 38, denied repeatedly discharging a shotgun at Mr McGurk but were found guilty and sentenced to 12 years and eight years in prison respectively at the High Court in Glasgow, pictured.

The court was told Docherty fired the gun and Templeton acted as the getaway driver of a Mercedes that was captured on CCTV at a Tesco petrol station beforehand then caught on camera entering and leaving Crosslee.

Giving evidence, Mr McGurk said he couldn’t tell who had shot him, adding that he didn’t think Templeton had been involved as they had been friends.

According to the BBC, when asked by prosecutor Paul Nelson if he had done anything that might have led to him being shot, Mr McGurk replied that he hadn’t. He said: ‘I can’t remember much. It is all a blur to me. I got shot from behind. I heard a bang and I was propelled forward.’

CCTV footage seen by the jury showed the injured Mr McGurk staggering away for help.

The BBC reported Judge Lord Armstrong as telling Docherty and Templeton: ‘This was an unprovoked and concerted attack, a brutally and excessively violent attack with a shotgun. The injuries inflicted were life-threatening and without medical intervention Mr McGurk would have died.’

Docherty had been out on licence after being jailed for life in 1995 for the murder of 69-year-old John Boyd at his cottage near Patna in Ayrshire. He was put back behind bars in November 2017.