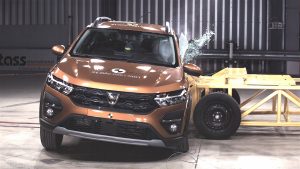 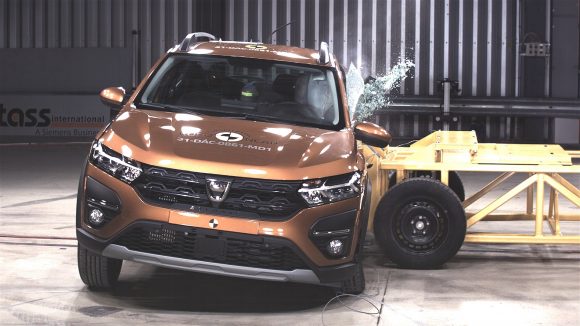 The new Dacia Sandero has been awarded a two-star safety from independent crash testers Euro NCAP, which may now result in the car losing its What Car? Car of the Year 2021 crown.

While the organisation described the Sandero’s crash protection as ‘respectable’, it was the car’s lack of driver assistance systems that let it down.

The two-star rating is the lowest of any car since a more stringent testing programme was introduced last year.

The Euro NCAP tests were revised last year to take into account – among other factors – standard and option safety equipment, rather than just the car’s overall strength in a crash.

Euro NCAP found the new Sandero’s radar-only autonomous braking system reacts to other vehicles, but lacks the capability to prevent crashes with pedestrians or cyclists.

Consequently, the Sandero scored a lowly 42 per cent in this category.

It also fails to include lane-keep assist – a feature found on many new cars sold today.

Euro NCAP said that the Sandero’s crash protection could enable it to be a four-star car ‘were it not for its shortcomings elsewhere’.

‘Safety has moved on’, said Michiel van Ratingen, secretary general of Euro NCAP, ‘and the biggest strides forward are now being made by using high-tech to prevent accidents from happening.

‘Clearly, Dacia have found their market and they’re sticking to it, but a two-star rating shows little ambition, even for a low-cost product.

It appears Dacia has made a clear decision not to prioritise safety, exposing occupants and other road users to increased risk

‘Their decision not to offer a camera clearly is out of step with the market and disappointing as Dacia are aware that their cars will soon have to comply with the new General Safety Regulation.’

UK testers Thatcham Research was even more critical. Its director of insurance research, Matthew Avery, said: ‘The Sandero’s Euro NCAP rating is a major disappointment and it’s therefore not a new car we would recommend.

‘Renault and Nissan both have five-star rated models in the supermini segment with the Clio and Micra, and the Sandero is closely related to these vehicles. But it appears Dacia has made a clear decision not to prioritise safety, exposing occupants and other road users to increased risk.

‘With this car, the active safety capability isn’t where we would like it to be and that’s a big disappointment in 2021.’

The Sandero has been named as What Car? Car of the Year for 2021, but the magazine said the car could lose its title.

Writing on the What Car? website, editor Steve Huntingford said: ‘A two-star Euro NCAP rating is below our expectations for an award-winning car, and as a consequence we have downgraded our own scores for the Sandero with immediate effect; it now gets two stars for safety and four overall.

‘We are analysing the findings from Euro NCAP in detail and discussing with Dacia its plans to improve the safety rating. If this cannot be improved the Dacia Sandero will lose its overall Car of the Year title.’

A Dacia spokesman told What Car?: ‘The safety of our customers is of the utmost importance.

‘We continue to improve the safety of our cars year-on-year and, as a result, each generation of vehicle is safer than the previous one.

‘The All-New Sandero and Sandero Stepway are safe and protect occupants to a high standard. However, we will take these results into account while continuing to strike the perfect balance of safety, customer expectations and affordability.’

Separated by ‘no more than a few points in the different areas of assessment’ the pair delivered a score of over 90 per cent of adult occupant protection.

The ID.4 does, however, offer Local Hazard Warning as standard, which can alert users to oncoming incidents on the road. This is something that is yet to be offered on the Enyaq iV.