THE UK new car market fell by 4.6 per cent in May with 183,724 units registered, according to figures released today by the Society of Motor Manufacturers and Traders.

The fall reflects continued uncertainty over diesel and clean air zones as well as the removal of incentives for plug-in hybrid vehicles, said the SMMT. Meanwhile, the underlying economic and political instability continues to affect consumer and business confidence.

Drops were recorded across all sales types in the month, with registrations by private consumers, fleets and business buyers falling by 5.0 per cent, 3.0 per cent and 29.0 per cent respectively. Most vehicle segments experienced a fall in demand, although executive and dual-purpose vehicles bucked the trend, with registrations growing by 9.1 per cent and 16.0 per cent. While demand for superminis and small family cars fell, these vehicles remain the most popular, taking a combined 56.3 per cent of the market. 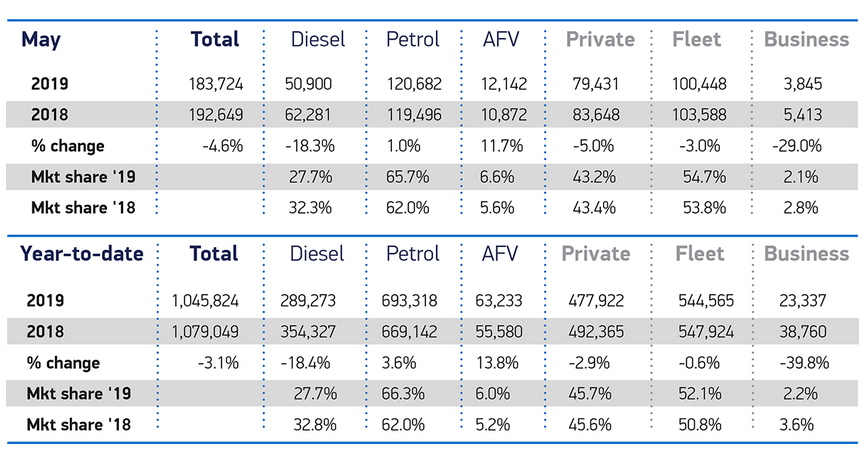 Modest growth in registrations of petrol (1.0 per cent) and alternatively fuelled vehicles (11.7 per cent) wasn’t enough to offset the significant decline in demand for diesels, which fell for the 26th consecutive month. Ongoing anti-diesel sentiment and the forthcoming introduction of low emission zones was continuing to affect buyer confidence, said the trade body.

However, thanks to significant industry investment in new technology, the latest diesels are safer and cleaner than ever before and won’t face charges or restrictions anywhere in the UK, it pointed out.

Meanwhile, petrol electric hybrids experienced increased demand – up 34.6 per cent to 7,785 units. Battery electric cars also recorded a significant rise of 81.1 per cent, yet this segment still only represents 0.6 per cent of the overall market. However, following recent trends, plug-in hybrids experienced another substantial decline, down 40.6 per cent in May and 25.1 per cent year-to-date. This compares with a 36.2 per cent increase in the first five months of 2018 and, said the SMMT, was further evidence of the removal of the purchase incentive for PHEVs.

‘New cars are safer, cleaner and more advanced than ever, and with sophisticated safety, efficiency and comfort features as well as a host of attractive deals on offer, there has never been a better time to invest in a new car.’

MORE: Car registrations up by 1.4 per cent in February, reports SMMT