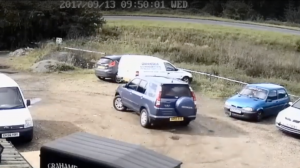 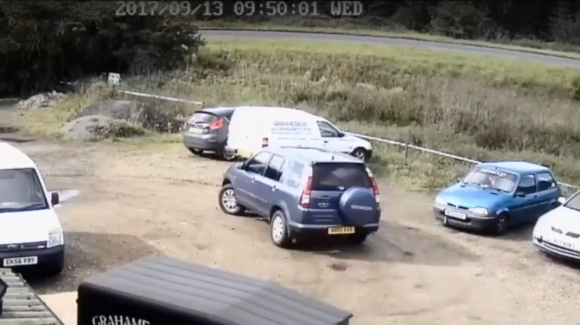 A CAR DEALER who posed as a trading standards officer to try to recover a customer’s car so dangerous that it was labelled potentially ‘catastrophic’ by a judge has been jailed for a year.

Mark Drury, 45, of Garfit’s Lane, Boston, Lincolnshire, was imprisoned on Friday after admitting supplying a dangerous product on a limited basis that he had no involvement in the sale and attempting to pervert the course of justice.

Lincoln Crown Court was told Drury – who had previous convictions for common assault and dishonesty – sold the 2005-reg Honda CR-V Sport to Donna Woodlow in 2017 from a yard in Kirton. No sale price was given, although Lincolnshire County Council told Car Dealer Magazine that a £200 deposit was paid. 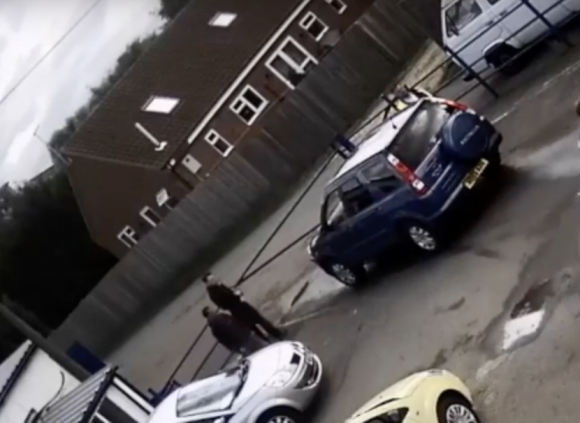 Mark Drury, right, by the Honda CR-V after staff at Whittington Garage had blocked his exit

However, prosecutor Jonathan Goulding said that the day after picking up the compact crossover SUV, she noticed a ‘crunching’ noise coming from the back of the car so took it to her local workshop – Whittington Garage in Kings Lynn – where mechanics found both the prop shaft and both drive shafts had been removed. They then informed Lincolnshire trading standards. Goulding added that the missing parts meant the brakes could have failed and the rear wheels fallen off.

Trading standards seized the car and ordered it to remain at Whittington Garage to undergo further safety tests. They also contacted Drury about it and a day later Drury arrived there, pretending to be the trading standards officer in charge, and tried to tow the SUV away, but quick-thinking staff at the garage realised what was going on and blocked the vehicle in. Drury then ran off.

The name of the garage that sold the car wasn’t given, but Lincolnshire County Council said Drury operated businesses under a number of names from premises at 47 London Road, Kirton, near Boston.

Vehicle expert Mark Brown, who gave evidence at the case, said: ‘The car was unroadworthy and in a dangerous condition when sold. The rear brakes were worn out and incorrectly assembled, the prop and drive shafts had been removed and there was practically nothing holding the rear wheels on.’

After going to Whittington Garage, Drury attempted to alter his appearance by wearing glasses and shaving his hair, the court was told.

In mitigation, the court was told that Drury wasn’t involved in the Honda sale and had been diagnosed as having a ‘reactive attachment disorder’ after seeking help from a counsellor.

Jailing Drury for 12 months, Judge Simon Hirst said: ‘Perverting the course of justice is very serious. Mr Drury knew what he was doing and caused distress to everyone around. Mr Drury is a man of very deceptive nature – a dishonest man, who twisted and turned at every opportunity to get out of the situation.’ The judge added that the Honda’s condition was potentially ‘catastrophic’.

After the case, Sara Barry, head of trading standards at the county council, said: ‘In Lincolnshire, we target our resources against those individuals and businesses that cause the most problems for consumers – this case was no exception. Vehicles which are dangerous and unroadworthy put all our lives at risk. This case should send out a very strong message to rogue traders – we will prosecute you and bring you to justice.’

Video evidence of the state of the car:

Pictured at top: Posing as a trading standards officer, Mark Drury tries to drive off in the Honda CR-V

Videos and pictures used with permission of Lincolnshire County Council