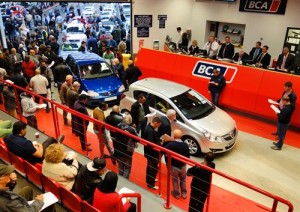 AVERAGE used car values reached record levels for the second month running in August, according to BCA’s latest Pulse report. The headline average value of a used car rose by £295 to £8,001, with performance against CAP Clean improving by a point to 97.8 per cent.

Year-on-year, August 2014 was ahead by £964 or 13.6 per cent, with both average age and mileage falling over the period. CAP Clean performance was up marginally year-on-year.

Fleet and lease cars averaged £9,593 in August, the second-highest monthly figure on record, while dealer part-exchange values fell slightly from the record levels reached in July. Nearly-new values rose to their highest point in two years, although model mix has a significant effect in this low-volume sector.

Simon Henstock, BCA’s UK operations director, said: ‘With the plate change now in full swing, we expect volumes to rise from late-September onwards and this traditionally exerts some pressure on average values and conversion rates. Currently, demand remains very good and there is plenty of interest for the best-quality cars – which continue to achieve strong prices. Poorly presented and damaged vehicles might begin to struggle, however, and if the market conditions tighten then these vehicles will need to be competitively priced to stimulate interest.

‘Looking ahead to the final quarter of the year, we expect the used market to generate good volumes of business if demand continues at the levels we have seen throughout 2014 so far. Stock availability will remain critical, however, and the real challenge for dealers will be to maintain good supplies of ready-to-retail vehicles as the economy improves and motorists think about changing their current vehicle.’