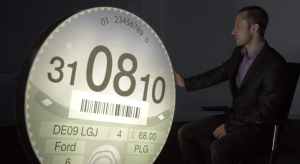 THE DVLA is attempting to educate the public on the upcoming abolition of the tax disc.

But instead of easy-to-understand adverts, the organisation has created a film… and Joe Public’s reaction hasn’t been positive.

The film describes the ‘break-up’ between a man and Tina the tax disc. The emotionally-wrecked chap says: ‘I’m 30, you’re 93… you can’t deny that in that time you have put on a few pounds and we’ve been spending too much time together.

The film aims to describe how much easier it will be for motorists to tax their vehicles online.

We won’t repeat all of the film’s beautifully written script but we will share YouTube’s reaction.

One viewer said: ‘What a waste of money this video was. The money would have been better spent on informing us how to actually pay for our road fund licence instead of this stupid rubbish,’ while another posted: ‘Video was s***… I don’t understand a word he said.’

A DVLA spokesman told Car Dealer: ‘We produced the video at no cost to the taxpayer as a light hearted goodbye to help raise awareness that there will be no more tax discs from 1 October. We are really pleased with the reaction to the video as it continues to raise awareness of the changes which is what it was meant to do.

‘We have produced further detailed information videos on what the changes mean to customers which we will be releasing over the next few weeks.’

My Confession: Something fishy that caused a right stink…

Car repossessions allowed to recommence on January 31, despite FCA extending help for mortgages