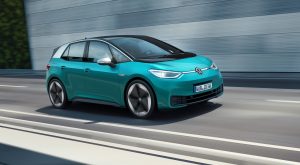 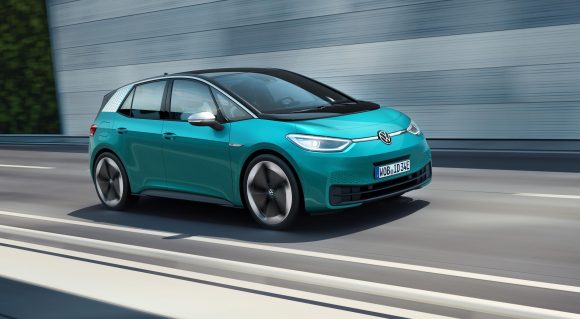 VOLKSWAGEN’S all-electric ID.3 has made its world debut at the Frankfurt Motor Show.

Arriving as the firm’s first purpose-built all-electric vehicle, it’s based on a bespoke pure-electric platform that is destined to underpin several other models.

Initially offered in ‘1st Edition’ specification, it’ll come with a 201bhp rear-mounted electric motor linked to a 58kWh battery. It means the ID.3 will be able to travel between 186 and 261 miles on a single charge, according to Volkswagen.

All of those ‘1st Edition’ cars have already been reserved, with first deliveries expected to arrive in the UK next summer.

It’ll be around the same time that the remainder of the ID.3 models go on sale. A lower-powered 148bhp variant will be available – with a range of between 143 and 205 miles – along with a more powerful version boasting 201bhp and a 77kWh battery. It’s this version that Volkswagen says will be able to travel up to 342 miles between trips to the plug.

The car is just 3mm longer and 19mm wider than the regular Golf but arrives with a wheelbase that’s 145mm longer than the traditional hatch. That should result in better interior space – and boot space is decent too at 385 litres.

Inside, the cabin has been kept uncluttered, with a main floating ‘panel’ the primary source of infotainment. It’s 10 inches in size and allows features such as Volkswagen’s ‘touch-sensitive bar’, letting the driver control various climate control options.

MORE: VW to usher in new era of buying cars as it restructures sales model