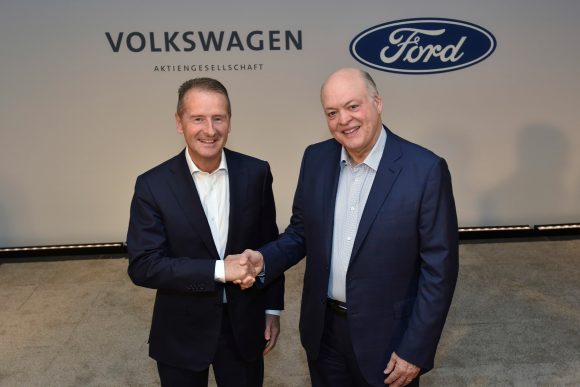 Ford and Volkswagen expand alliance with autonomous and EV tech

FORD and Volkswagen have revealed that their global alliance will now include the sharing of electric car tech as well as the development of autonomous systems.

Announced on Friday, it will allow Ford to use Volkswagen’s MEB modular platform to ‘deliver a high-volume zero-emission vehicle in Europe starting in 2023’.

It will see a Volkswagen platform underpinning a future Ford vehicle, which is likely to use a lithium ion battery and electric motor sourced from the German manufacturing giant.

In total, Ford expects to deliver ‘more than 600,000’ European vehicles which utilise the MEB platform.

Herbert Diess, Volkswagen chief executive, said: ‘Looking ahead, even more customers and the environment will benefit from Volkswagen’s industry-leading EV architecture. Our global alliance is beginning to demonstrate even greater promise, and we are continuing to look at other areas on which we might collaborate.

The @VWGroup will also join Ford in investing in @ArgoAI allowing both automakers to independently integrate Argo AI’s self-driving system into their vehicles. pic.twitter.com/ZXH4eulIlK

‘Scaling our MEB drives down development costs for zero-emissions vehicles, allowing for a broader and faster global adoption of electric vehicles. This improves the positions of both companies through greater capital efficiency, further growth and improved competitiveness.’

A key element of the partnership is an investment by Volkswagen in Argo Al, an autonomous car company which Ford backed in 2017. The German firm will put forward £2.1 billion in funding, as well as purchasing shares from Ford.

Jim Hackett, Ford president and chief executive, added: ‘While Ford and Volkswagen remain independent and fiercely competitive in the marketplace, teaming up and working with Argo AI on this important technology allows us to deliver unmatched capability, scale and geographic reach.

‘Unlocking the synergies across a range of areas allows us to showcase the power of our global alliance in this era of smart vehicles for a smart world.’

In our picture, Herbert Diess, left, and Jim Hackett shake hands on the deal.