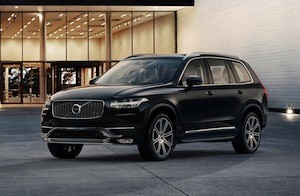 CUSTOMERS eager to be the first to own the brand new Volvo XC90 will be able to jump the queue if they’re prepared to pay for the privilege.

Next month, eager buyers will be able to place their orders online for a limited-run special packed with all the optional extras.

Called the First Edition, the exclusive model will cost £68,000 and will be available on volvocars.com from 3pm on September 3. The Swedish firm is making just 1,927 examples worldwide.

The special edition will also be powered by a 222bhp, twin-turbocharged 2.0-litre four-cylinder diesel engine – badged D5 – and teamed with an eight-speed automatic gearbox.

The First Edition naturally precedes the complete XC90 model line-up due on sale in spring 2015.

With a starting price of £45,785, the second-generation XC90 is the first Volvo to use the firm’s new Scalable Product Architecture (SPA) which will form the basis of a whole raft of new models in the next few years.

The new XC90 is also the first model to showcase Volvo’s new simplified dashboard concept which uses an iPad-like screen to replace a large number of controls.

Alain Visser, senior vice president, marketing, sales and customer service of Volvo Car Group, said: ‘Those who want to be among the first ones to own the best SUV in the world have to act fast. The huge interest in the all-new XC90 indicates that the First Edition will sell out quickly.’

‘We are creating an online ecosystem that simplifies the process of shopping for, buying and owning a Volvo,’ said Visser. ‘We also see the introduction of the new XC90 as the perfect platform for introducing a new, outstanding customer experience, which we are rolling out globally.’