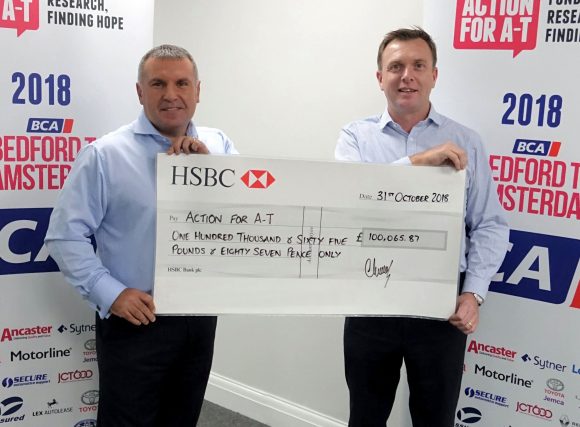 WITH all the donations and pledges now collected, BCA and Action for A-T have confirmed that the 2018 BCA Cycle Challenge raised a grand total of £100,065.

The money will help fund Action for A-T’s ongoing support of research into the rare genetic childhood disease ataxia telangiectasia.

Both of them completed the challenge – a 245-mile, three-day ride from BCA’s head office in Bedford to the Royal Palace in Amsterdam.

The event featured cyclists from BCA and the wider motor industry who were joined by broadcaster, journalist and well-known cycling enthusiast Naga Munchetty, who tweeted the progress of the event to her 105,000 followers. The team left BCA Bedford on the morning of September 20, arriving at the Royal Palace two days later.

Purvey said: ‘Everyone who participated would like to thank all the sponsors and supporters who helped to make the 2018 BCA Cycle Challenge possible.

‘We are delighted to announce that we have broken through the £100,000 barrier this year, having raised £93,000 in 2017. We know this money will be put to very good use helping to identify a cure for this debilitating childhood disease.’