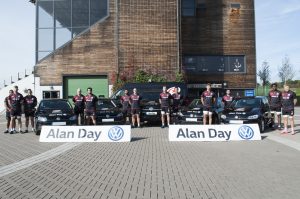 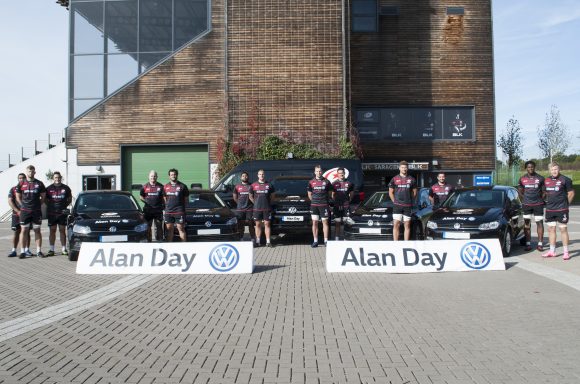 The London-based dealership supplies a fleet of vehicles for the players, coaching team and medical staff for general use and to support the club’s community projects.

The vehicles feature the initials, with the number of home games, of Saracen’s past and present players who have achieved more than 100 caps for the club, as well as the Saracens and Alan Day emblems.

Paul Tanner, managing director of the Hampstead dealership, said: ‘Alan Day VW are delighted to renew our sponsorship deal with Saracens, who have just been crowned champions for the fourth time.

‘We are proud to sponsor such a fantastic club along with the inspiring Saracens Sport Foundation, and will continue to support the club and their supporters, with whom we have forged a unique relationship.

‘This special bond between the club and Alan Day is very strong, and we look forward to continuing our partnership in the future.’

Alan Day VW, which also has showrooms in The City and New Southgate, has been the official car supplier to the club for the past four seasons.

Staff, including Tanner, also support the club’s disability programme, helping coach youngsters with learning difficulties at Allianz Park in Barnet by organising touch rugby sessions in conjunction with the foundation.

‘Over the course of the past four years together, Alan Day have become an integral part of our partnerships family, supporting the club across the board.

‘From their involvement with the players to their backing of the Saracens Sport Foundation and the disability programme, Alan Day have illustrated how closely our two companies’ values are aligned, and we very much look forward to continuing to work together in the future.’

MORE: VIDEO – Alan Day customers and staff show how happy they are!