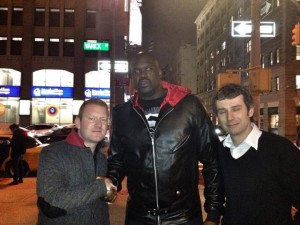 Stood outside our hotel in the middle of New York an absolute giant of a man brushes past me.

I recognise the face, but can’t think where from. Then it hits me – all those hours spent playing basketball computer games weren’t in vain. It was none other than man mountain Shaquille O’Neal, NBA basketball star and rapper, and towering above pretty much every one in the world (even me) at seven foot one inches tall.

‘Tell me if I marry the queen of England does that make me a king?’ he asked as Jaguar PR man Dan Connell and I posed awkwardly with him for a picture.

‘Of course it does,’ we replied.

‘Well, I think I’m just going to have to go do that,’ said the rather excited looking bear of a man.

I did have photographic evidence of this close encounter, but unfortunately I let someone else take it on their phone. Someone who’s been completely unobtainable ever since. Note to self: If you meet one of your heroes again get the picture taken on your own phone!

The strange encounter summed up a bizarre, but incredible, few days in New York. On Tuesday we saw Bond unveil the new Range Rover Sport at a party littered with celebs. Even Thierry Henry was there and he’s a footballer I HAVE heard of. He’s no Steve Claridge, but I was still impressed… 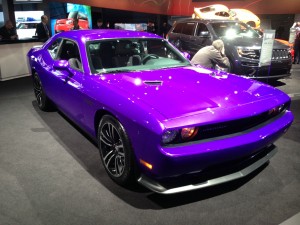 Purple: Just the sort of manly colour that all Dodge Challenger owners should approve of.

But let’s not forget the real reason I am out here. I haven’t defected to OK! and can assure you I did actually look at some cars.

The New York Motor Show is a small affair – it’s no sprawling metropolis of motors like Frankfurt *shudders at the thought*, it’s more compact and manageable. I walked around it easily a few times.

It had pulled in the industry big wigs too. Obviously the great and the good from Jaguar Land Rover were there, but I even watched Carlos Ghosn, Renault-Nissan overlord, wandering the halls while giving interviews to a string of TV channels. 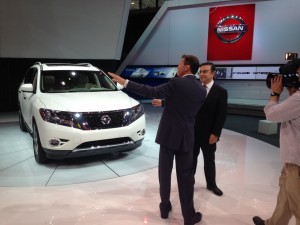 So what were the star cars? Well, it can be summed as such: A fast German saloon, two meaty Jags, a show-stealing Range Rover Sport, a lot of muscle cars and a load of largely irrelevant-to-the-UK metal.

The CLA 45 AMG looks a corker. Following hot on the heels of the four-wheel drive A45 AMG, the saloon looks awesome and with 335bhp from a 2.0-litre turbo-charged engine we can’t wait to get behind the wheel.

The American muscle was flexing too. A new Viper with 640bhp, a mad Camaro with 500bhp and a cool purple Dodge Challenger with 470bhp and lashings of retro cool all starred. 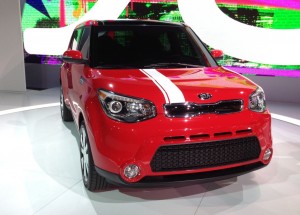 Got Soul? New York has.

However, of more relevance to the UK market was the new Kia Soul – with new looks front and rear and improvements to refinement, it’s a pleasant nip and tuck that should go down well with buyers.

But there’s no doubt the Brits stole the show. Two new Jaguars – the XJR and XKR-S GT – and the aforementioned Range Rover Sport drew huge crowds. I was more impressed with the way a string of talented Brit execs from the company spoke with real passion about the hard work they’re doing with the brand – and boy does it show.

In fact this whole trip has made me feel rather proud to be British. Ok, so we can’t cope with a bit of snow, but when it comes to cars we sure know what we’re doing.