Car Dealer Live special: Behind the gates and inside the showroom of supercar dealer Tom Hartley

Tom Hartley is one of the motor trade’s unique characters.

Direct, focussed and to the point, the 58-year-old car dealer has been in the trade since he was a boy.

He started out buying and selling cars at the age of 12 and has grown his business empire to a multi-million pound set-up that now shifts supercars to the rich and famous.

Currently in stock are million pound motors including a Porsche 918 Spider, Bugatti Veyron and Ferrari F50 – and he’s taken the time to show Car Dealer around.

His dealership really is rather unique. Built on a 40-acre estate in Swadlincote, Derbyshire, from the roadside it looks pretty unassuming.

But behind the electric gates, is a treasure trove of supercars spread between two showrooms – the latest just built at a cost of £10m.

The new showroom is split over three floors. There’s a lift that takes cars up and down, a car turntable on the basement floor and a classic car section on the top, where a white Wolf of Wall Street special Lamborghini Countach takes centre stage.

Next to the showrooms is Tom’s house, rebuilt from the ground up eight years ago – ‘each brick was hand made and cost a £1 each’ – and across the immaculately manicured lawns is his son and business partner Carl’s home. 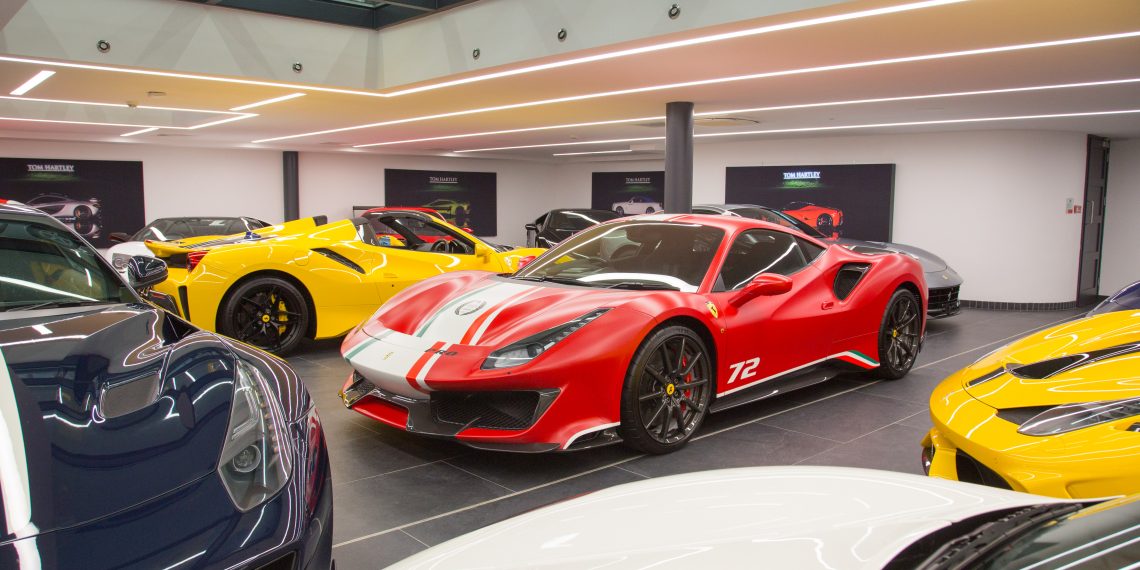 Elsewhere on the estate his other children have homes too.

‘I built this,’ he tells Car Dealer, during our visit.

‘I have never borrowed a penny in my life. I have never had a mortgage or a loan – what you see here has been bought and paid for with my own money.’

And that includes the stock. Business partner and son Carl tells us there’s often more than £30m worth of metal on the estate, paid for with cash.

‘My dad taught me that we make an offer and stick to it – and pay up,’ said Carl. ‘We’re buying and selling cars all the time.

‘We sold six on Saturday – business has never been better.’

The Hartleys give us a guided tour of their latest showroom – pointing out the glass floors so you can see the cars from below.

Carl’s office is in the centre of the showroom, behind domed glass, where he sits behind a huge desk with smart new leather chairs for clients.

Next to the office is a bar with wine chilling on the counter and optics of Grey Goose Vodka on the wall. 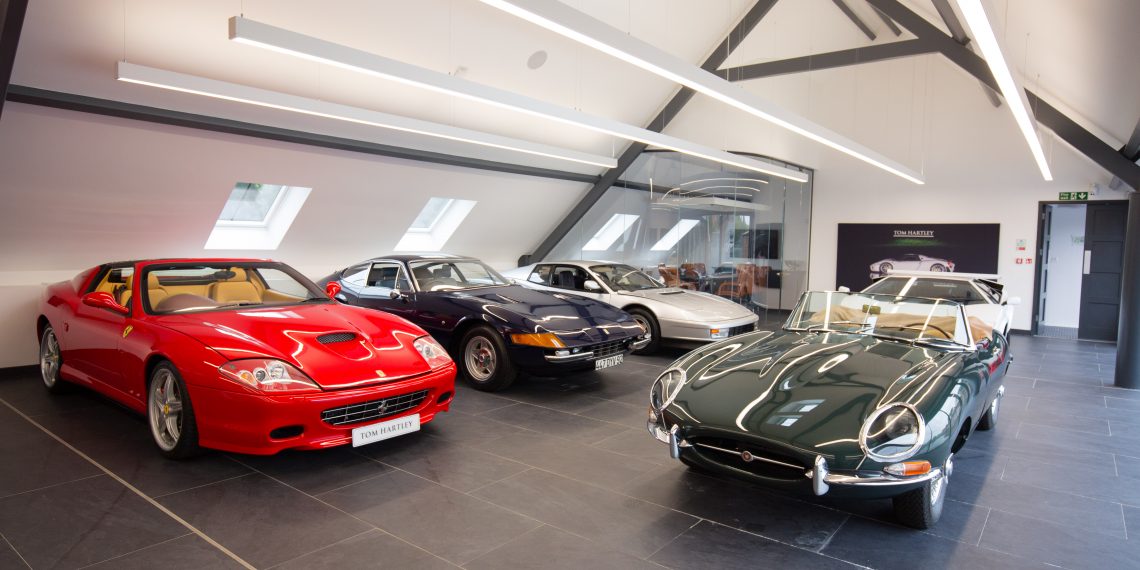 ‘The only reason someone wouldn’t buy a car from us when they get here is that they didn’t like the colour.

‘I’d say we convert at least 90 per cent of the people who drive through those gates. We know who they are and what they want before they get here.

And Hartley says this has continued throughout the lockdown – while the coronavirus shut down dealerships across the country, the family firm carried on unaffected.

‘We were locked down on day one when it all happened, and then it was business as usual,’ said Tom.

‘We were the only dealership in the country legally allowed to open during lockdown as this is my home and business. I live here, I work here.

‘Carl and I have our board meetings around the breakfast table over a boiled egg.’

The Hartleys even took advantage of the lockdown. While supercar prices have dropped 15 per cent since the pandemic, says Carl, that’s opened up opportunities.

‘People are selling and we’re buying at the right price,’ he said.

‘And we’ve been very busy. The rich aren’t really affected by a recession, it just presents more opportunities.’

Tom walks me around the estate, starting in his office – a polar oppositive to the modern interior of his son’s.

‘See my computer?’ he says, pointing to a pen and a telephone on the roll top leather desk.

‘I don’t need a computer, that’s how I make my deals with a pen and phone.’ 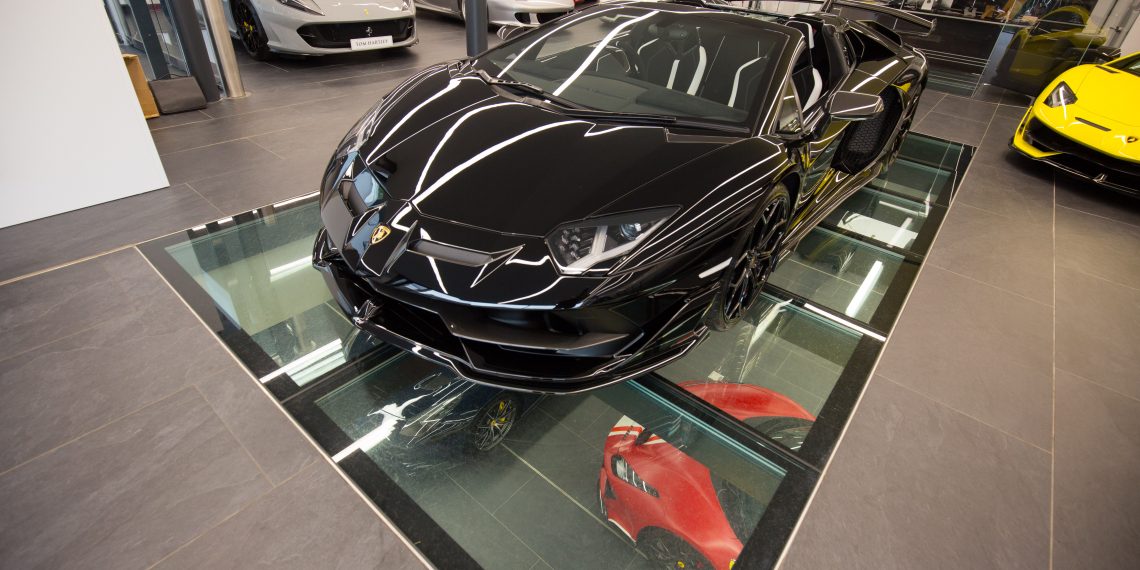 Covering the walls are countless press cuttings of the Hartleys in the limelight. From the days he set the price of the Jaguar XJ220 at half what Jaguar wanted to sell at, to pieces about his sons following in their father’s footsteps.

It feels like a gentlemen’s club, with red leather chairs and deep carpet.

‘At 3am one morning I got the idea for the lake and called my son. He thought I was mad.’

‘Can you feel the aura in here?’ he asks.

‘I’ve had everyone in here, from new money to old, rich and famous, but they’re all treated the same – they’re clients to me.’

Hartley’s tour takes in his famous lake – in the back garden of his house is the car photograph stage like no other.

Costing £250,000, he built a platform just under the water line so his multi million pound stock could be photographed in reflective glory. A marketing masterpiece that has bought him worldwide attention. 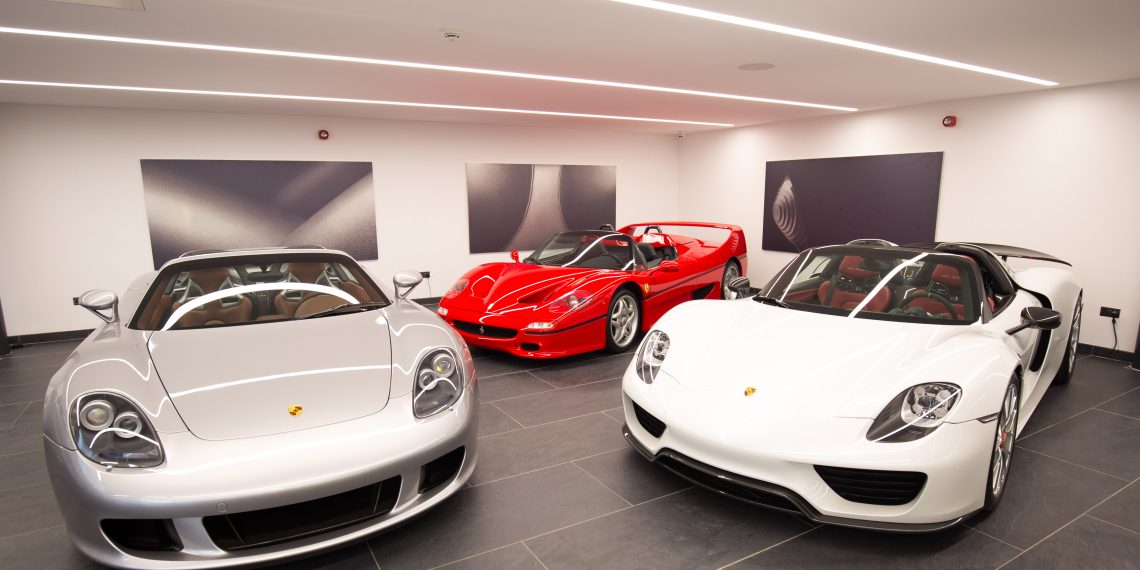 ‘I spotted photographers when they came to the estate would wet the tarmac in front of the cars with a hose to light up the cars better when they took the pictures of them,’ he said.

‘At 3am one morning I got the idea for the lake and called my son. He thought I was mad. It’s now become the most famous car stage in the world.’

Hartley says some in the motor trade refer to him as the ‘Godfather’ and the UK’s ‘first celebrity car dealer’.

‘I get asked for my autograph all the time,’ he says. ‘There aren’t many car dealers who can say that.’

This year he published his autobiography ‘The Dealmaker’ – a term he says he has trade marked and has to send out countless legal letters about every week to defend.

‘I have trademarked the deal maker – that’s me, no one else,’ he said.

His book has sold 12,000 copies since release in the UK and the same amount in the States where it is ‘going mad’. Car Dealer was sent a review copy and we have to say it’s well worth a read.

‘I’ll probably die in this chair doing a deal.’

It’s clear to see why Tom has been such a success. His attention to detail is impeccable and hospitality second to none. He’s attentive, interesting and great company.

It’s clear he loves the motor trade too – and is doing what he can to help others.

‘I am happy to help others out and inspire the next generation of dealers,’ he said.

‘I hope the book does that. I like to inspire the next generation. My children were educated at this desk from the age of 11 onwards.’ 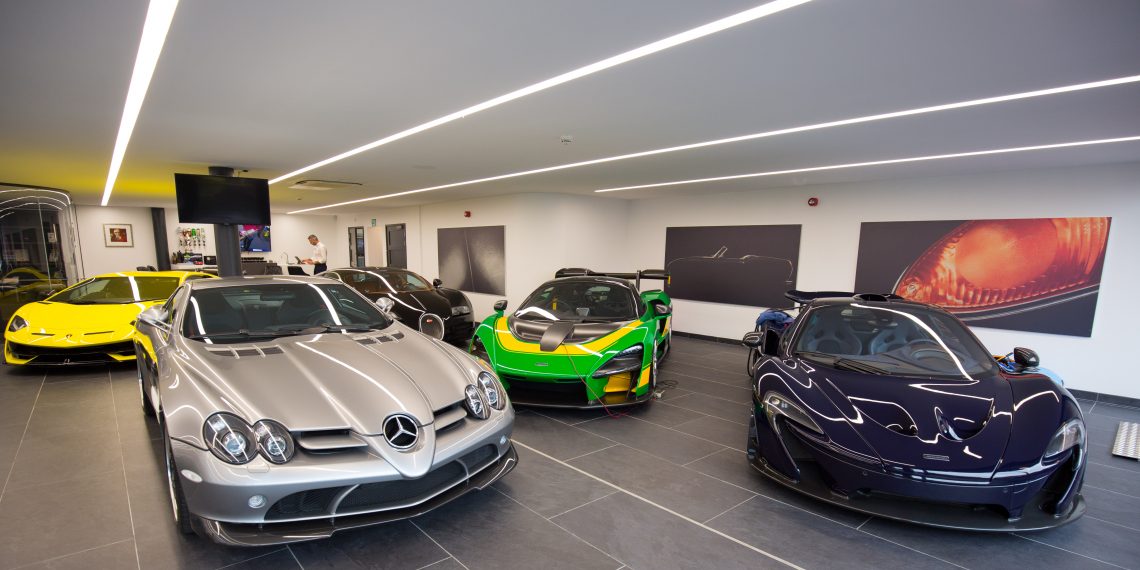 And his passion for his estate stretches to life after it too, admitting to Car Dealer that he’ll be buried in a tomb on the site.

‘I’ll reveal now I have made plans to be buried on this site in a tomb – I’ll probably die in this chair doing a deal,’ he said.

Hartley is cagey about revealing how much the family firm makes, but says the company accounts don’t reveal the full picture.

‘We like to keep much of what we do private,’ he added.

But with a cheque book able to purchase multi million pound cars at the drop of a hat and a dealership built with no expense spared, few would argue that Hartley has the collateral to back up his claims.

‘There are other car dealers, and then there’s Tom Hartley,’ he said.

‘I’ve had offers to take the brand and license it and it has value. We could have taken investment and gone bigger, but we don’t need to.

‘I like to be in control, I don’t want to answer to 12 people around a boardroom table. I make the calls with Carl. It works.’

What’s next for Tom Hartley then? After nearly 50 years in the motor trade where does he go next? 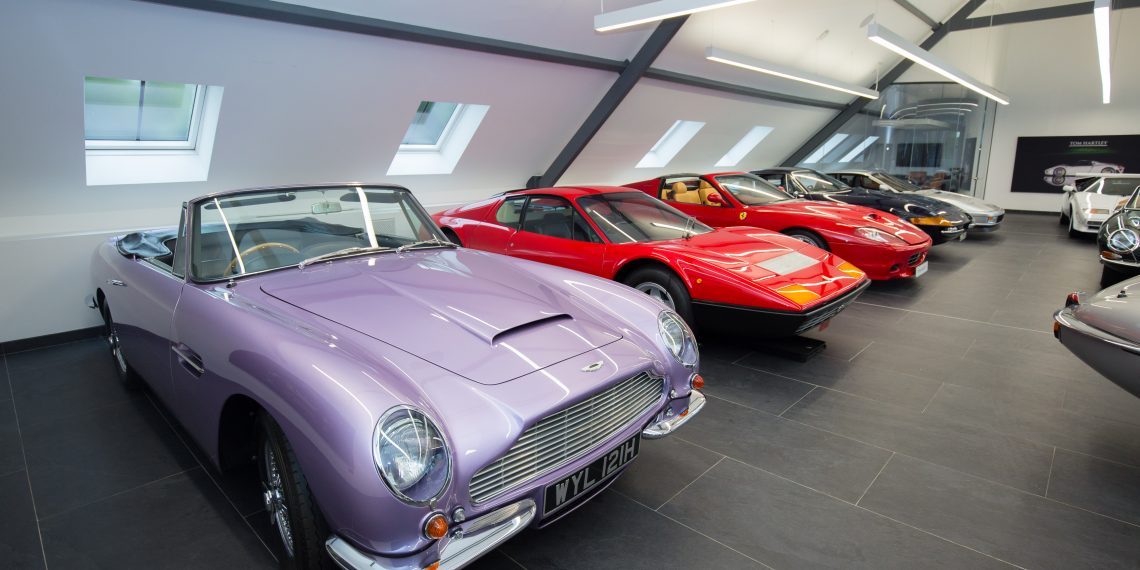 So why not sell executive saloons at a car supermarket where he could get the thrill of the deal countless times a day?

‘That’s not me – I like quality, I like supercars and the prestige that comes with them. I’ll stick with the Ferraris.’