The largest Ford-owned dealer group in the world is planning to trial a new ‘Smart Hub’ pop-up style dealership at a shopping centre.

The concept, first successfully used by Ford dealers in Turin, will soon be tested by TrustFord at the Junction 32 shopping centre in Castleford.

Speaking exclusively to Car Dealer in a special video interview, TrustFord chairman and CEO Stuart Foulds says the group will roll out the concept nationwide if the trial is successful.

Taking over space at the shopping centre, casually dressed staff will act as ‘product geniuses’ and talk customers through the vehicles.

There will be a focus on electric and hybrid vehicles from the Ford range and customers will be able to take a test drive if they want one.

Foulds said: ‘Ford have made a huge success of it in Turin and different parts of the world.

‘We have adopted the same principal and we’ll expand it across the UK.

‘It’s a more laid back atmosphere. Product geniuses can take people through the car’s features and benefits, there will be demonstrators in the car park and if they want to transact we can do that, but most of it will be done back in the main Ford store.’ 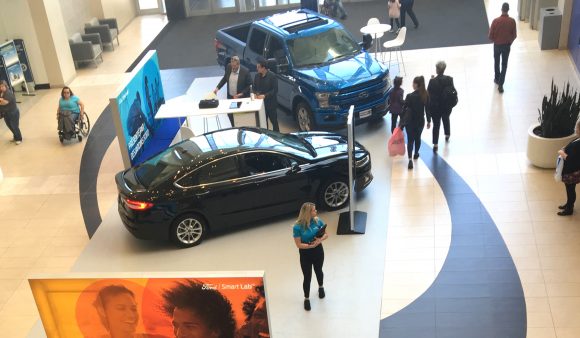 Ford opened this Smart Lab in Quebec City. TrustFord will name them Smart Hubs in the UK

Foulds believes this is a perfect blend of offline and online sales – the latter of which he isn’t convinced will work on its own.

‘It’s a showcase opportunity where people can see the car, there is no high pressure selling and they can talk to someone who knows about it and can give them the facts,’ said Foulds.

TrustFord has surveyed its customers and found that the vast majority still want to collect their new cars from a dealership.

He added: ‘Surprisingly, despite what people are claiming, the vast majority of customers want the experience of actually taking delivery of their car from the showroom.

‘That dispels the story that everyone wants to move to online purchases.

‘I don’t get that and the evidence we have seen, and our own experiences, is that yes people will do all the research online, but when it actually comes to getting the car there seems to still be an appetite for that visit to take place to go through the whole show of having the car unveiled and being able to drive it out of the dealership.’

In our exclusive interview, Foulds also discusses his fears on Brexit and the impact a no-deal could have on car prices.

And he says he does not believe the government will put their hands in their pockets to help the car industry when dealers have been presenting such a positive picture.

He said: ‘One of the problems is there have been too many chief execs that have been talking their share prices up by talking about how fantastically well they have done throughout this whole period.

‘If I was sat there as the government my question would be: If you’re doing so well, why do you need a scrappage scheme?

‘I think we have shot ourselves in the foot.’

In our chat, Foulds also explains how his business has coped since the lockdown and admits a strong balance sheet and a bank balance of £100m, helped ease the pressures.

Revealing TrustFord has now nearly made up for the losses it incurred during the lockdown, Foulds also speaks about how the regional restrictions have had little effect on his dealerships in areas like Manchester where rules are toughest.