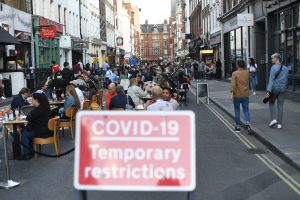 Richard Hughes, director of White Dove Motor Group, which operates Skoda, Seat and Suzuki franchises in Cardiff, said sales at his Seat dealership were down 70 per cent on the weeks when travel was allowed.

He said: ‘A customer from England thinks Wales is riddled with this disease and won’t commit to travel.

Some Welsh lockdowns have banned residents from leaving their local area and in Cardiff rules are particularly strict.

The local council says: ‘People are not allowed to enter or to leave or remain away from the Cardiff Council area without a reasonable excuse.’

Going to work is deemed as a reasonable excuse, but the rules are putting people off venturing out. 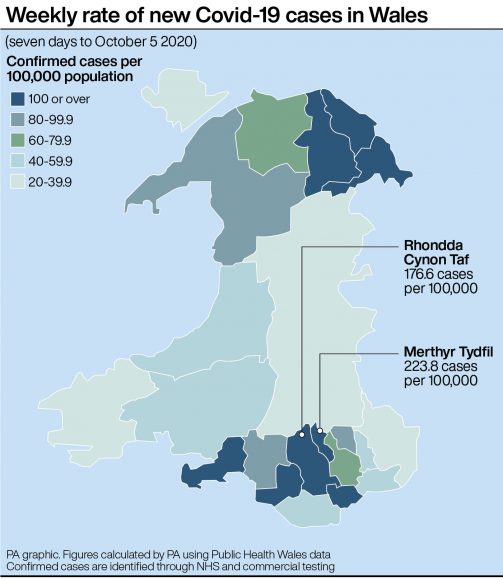 Hughes added: ‘Where lockdowns differ from England and Scotland is the ability to travel unless deemed essential.

‘So this barrier is between all boroughs and local councils. If you look at a map and carve the territory you’ll see Cardiff is literally isolated – unless dolphins or other fish want to buy a car.’

Hughes said things are slowly improving as he thinks some local residents have come to the conclusion that ‘life goes on’ but added he’s had to be creative with his marketing.

He said: ‘The restaurants are empty and there are limited people in the shops. Lockdowns may be ok, but teamed up with travel restrictions they’re not.’

Further restrictions are likely to be rolled out across the country as coronavirus cases soar in the north-east and north-west.

Plans to shut pubs and restaurants from Monday have been agreed, according to reports, and the chancellor is working on an emergency set of measures to help businesses affected.

The government has said it is still considering what action to take, but Cabinet minister Robert Jenrick has warned of a ‘fast and serious situation’ in the north, with Covid rates spiking in Manchester, Liverpool and Newcastle.

Scotland has also introduced more stringent measures, but none are as tough as the travel bans introduced in Wales. Not yet, at least.

Wessex Garages boss Chris Wiseman operates Kia, Hyundai and Nissan dealerships in Cardiff and a Renault/Dacia showroom in Newport – all of which are subject to the same travel restrictions.

He said that all his businesses had a ‘strong finish’ to September and it will likely be his ‘best ever’.

However, he told Car Dealer: ‘We are constantly sending video content demonstrating the showrooms are Covid-19-safe in order to prevent widescale cancellation of appointments in service or showrooms.

‘[But] we are starting to see a slight reduction in footfall in south Wales and our focus is on reassuring customers that the restrictions are around social movement and not there to penalise any retail businesses.

‘More worrying is the news that further lockdowns will come into play in England soon.’

Hughes said that his business had also enjoyed a record September and quarter three, despite the more recent struggles.

In a video interview, Forrester said he believes the economy can’t afford a second national lockdown.

He said: ‘I am not particularly worried, largely on the basis that the government cannot afford to take drastic action.’

He added: ‘You might get a dealership close if there is a plethora of Covid-positive cases and Public Health England may take some action, but I think that will be very localised.

‘I actually don’t think retail business is likely to be affected by stringent restrictions.

‘But who knows? I wouldn’t have predicted a lockdown in March.’