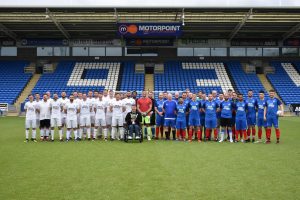 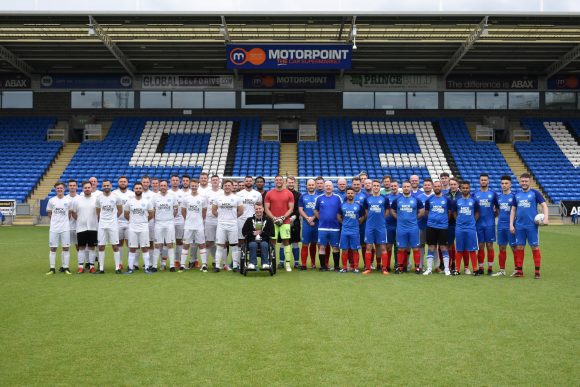 MOTORPOINT has raised more than £4,000 for one of its employees by hosting a charity football match.

Staff from all 12 branches of the independent car retailer travelled to Peterborough United’s Weston Homes Stadium to take part in a Motorpoint Peterborough v Motorpoint All Stars game to raise funds to pay for a new lightweight wheelchair for colleague Jason Brown.

Jason, who has worked for Motorpoint for 19 years, has a nerve-wasting condition called Dejerine Sottas Syndrome. This affects the nerves furthest away from the brain, causing muscle wastage in both lower arms and legs.

Peterborough United, who have been a long-term partner of Motorpoint, provided the company with use of the pitch for the day and kitted the players out in their first-team home and away strips.

The club also provided changing facilities and officials for the game which was won 4-3 by Motorpoint Peterborough.

A total of £4,380 has been raised to date. Additional fundraisers are being organised to help reach the £8,000 required to purchase the wheelchair.

Jason, who works as a customer care advisor at Motorpoint, said: ‘I really appreciate the generosity shown by the lads – both with their kind donations and the commitment displayed on the day, not just in terms of playing, but travelling many miles just to get to Peterborough.’

Tom Stanton, general manager of Motorpoint Peterborough, added: ‘I can’t thank enough everyone who took part. Not only did my colleagues drive half way across the country to play, but they raised an impressive amount of money for someone who is very close to the hearts of everyone at Motorpoint.’