The 62-year-old group operations director at Charles Hurst confirmed today (Nov 6) that he would be stepping down from the role this month, having worked in the motor trade for some 50 years.

He joined Charles Hurst in 1974 as an apprentice before quickly moving up within the company to a range of senior positions.

McNab became branch manager for Charles Hurst Renault in 1985 at the age of 25, and was promoted to the role of franchise director four years later.

In 2016, he was presented with the Lifetime Achievement Award at the 2016 Car Dealer Used Car Awards for his services to the industry.

McNab, who was made a fellow of the Institute of the Motor Industry in 1980, said: ‘It has been my pleasure to lead Charles Hurst over many years and to bring the business to where it stands today, along with the help of each and every person in our company.

‘I have no doubt that Charles Hurst will continue to go from strength to strength and I wish my colleagues every success for the future. 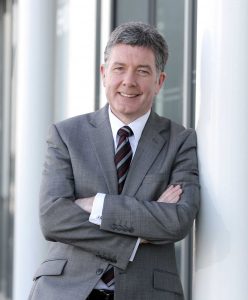 ‘I’m sure you can imagine it has not been an easy decision to make. However, after much thought and deliberation, I believe now is the right time for me to step away and enjoy my retirement.

‘I would like also like to thank our customers, suppliers and all our partners for their support over almost five decades and to reassure them of Charles Hurst’s unwavering and continued commitment to professional service, choice and value in every area of the business.’

Charles Hurst is one of Northern Ireland’s biggest employers and largest investors, with more than 800 staff across eight sites in Northern Ireland and the Republic of Ireland.

It was established in 1911, and its Belfast HQ is on a 30-acre retail site, making it the largest automotive park in Europe.