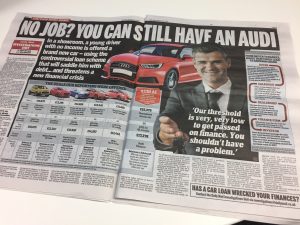 CAR dealers have come under fire from a national daily newspaper today over their use of PCP deals. 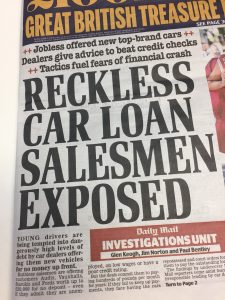 The front page of the Daily Mail carries the headline ‘Reckless Car Loan Salesmen Exposed’, with the story beneath claiming that ‘young drivers are being tempted into dangerously high levels of debt’.

Three further pages inside explain that Daily Mail reporters visited 22 dealerships in England and Scotland and despite pretending they were either on low incomes or unemployed they were offered PCP deals so they could take possession of new cars.

The paper says: ‘There has been a surge in motorists taking out loans for new cars and defaulting on payments. In a chilling echo of the sub-prime mortgage crisis of 2007, car finance firms packaged and sold £5.5billion of risky loan debt to investors last year – twice as much as the year before.

‘Last week, the Bank of England warned that drivers owe £58billion on car finance – an increase of 15 per cent in a year.’

The Mail also spoke to various finance companies that were named in its investigation.  Suzuki Finance said offers were subject to checks on credit and affordability while Volkswagen Financial Services said it expected salesmen only to give customers information that was ‘appropriate to their financial demands and needs’.

Vauxhall and Suzuki have launched investigations, the paper said.

Meanwhile, it seemed online commenters were less than impressed with the Daily Mail report. One, Percival Plugsey, wrote on MailOnline: ‘I’ll bet most of your fake buyers would have been turned down at the credit check stage. It’s not the dealers job to say “you can’t have credit”. Totally bogus article.’

Another, Catherine Neville, said: ‘The car salesman’s jobs is to shift cars. It’s up to the finance companies to establish the creditworthiness of the people they give finance to.’

And MillieMoo said: ‘Oh, give it a rest. The majority of people using car finance CAN AFFORD IT. It’s a way to have a safe, economical car.’