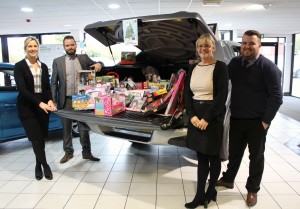 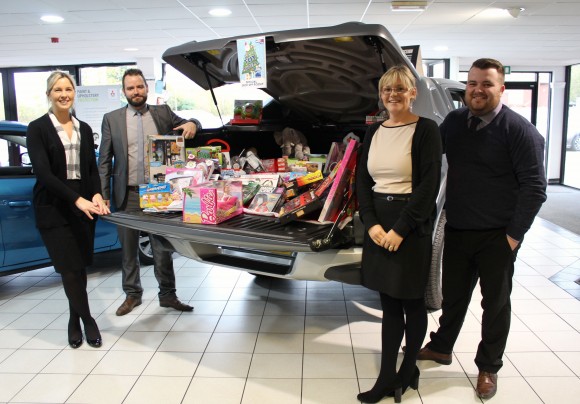 STAFF at a Mitsubishi dealership in Warrington have been busy collecting Christmas presents for children’s charities and there is still time to donate to the worthy cause.

Gallaghers of Warrington, in Manchester Road, is one of the collection points for Wire FM’s Christmas Toy Appeal 2015 which will see presents handed out to charities in Warrington, Widnes and Runcorn.

The scheme calls on people to buy one extra gift this Christmas, which will go to youngsters who might otherwise receive nothing.

Service advisor Alethea Heaton, who has been organising the collection, said: ‘Everyone has been so generous it’s been fantastic. We started off putting the toys in the boot of one of our Mirage superminis, then we needed a bigger car so we put them in the ASX and now we’ve got so many presents we have had to put them all in the back of a big L200 pick-up.

‘Our customers, suppliers and staff have all been donating to the cause and there’s still time for people to bring items into the dealership and help make Christmas better for underprivileged children in the local area.’

Mitsubishi Motors in the UK have also donated 10 rugby balls to the collection. A team from Wire FM will be broadcasting live from the dealership on Monday, December 14 when they collect all the gifts to be handed out.

MORE: 2015 will be a record year for new car registrations, according to CAP