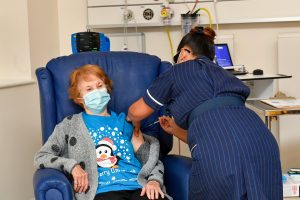 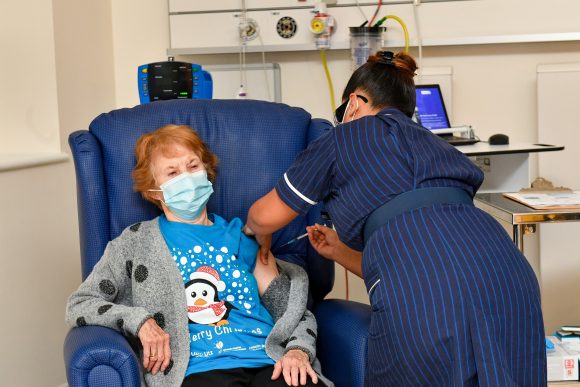 A grandmother in Coventry today became the first person in the world to receive Pfizer’s Covid-19 vaccine as the NHS embarked on a mass vaccination programme.

Margaret Keenan, who turns 91 next week, received the jab at 6.31am, marking the start of a phased rollout of the vaccine to older people, NHS staff and care home workers, with today being dubbed ‘V-Day’ by the health secretary.

She received the jab from nurse May Parsons at University Hospitals Coventry and Warwickshire NHS Trust, and said: ‘I feel so privileged to be the first person vaccinated against Covid-19.

‘It’s the best early birthday present I could wish for because it means I can finally look forward to spending time with my family and friends in the new year after being on my own for most of the year.’

Thank you to everyone who’s made this possible, from @MHRAgovuk clinicians, NHS admin staff, doctors, nurses, everyone who volunteered in the trials & those getting the jab today.

Let’s get this done! pic.twitter.com/fDixTMDXip

Green number plates are being officially launched today to make it easier to identify electric cars, with a distinctive green rectangle on the left-hand side.

Only vehicles with zero tailpipe emissions are allowed to display the plates, meaning hybrids and plug-in hybrids aren’t eligible.

A new survey suggests 32 per cent of people would be more likely to buy an electric vehicle with the introduction of the new number plates.

Uber is selling off its autonomous vehicles development arm as the ride-hailing company slims down after its revenues were pummelled by the coronavirus pandemic.

Self-driving vehicle technology company Aurora will acquire the employees and technology behind Uber’s Advanced Technologies Group in a stock transaction, the companies said on Monday.

Uber will also invest $400m (£299m) into Aurora, and Uber CEO Dara Khosrowshahi will join Aurora’s board of directors.

The PM is set for face-to-face talks with his European counterpart in a bid to salvage a post-Brexit trade deal after further negotiations failed to break the deadlock.

Boris Johnson and European Commission president Ursula von der Leyen have agreed to meet in Brussels after a lengthy telephone call on Monday – their second in 48 hours – to take stock of the faltering negotiations.

When they meet in the Belgian capital – with Wednesday and Thursday thought to be the most likely days this week – it will be the first time they have convened in-person since January, in a sign that talks are being stepped up.

The number of consumers carrying out ‘soft’ searches to check their eligibility for credit cards jumped by 41 per cent in mid-November compared with the first two weeks of the initial lockdown in March, according to Experian.

Experian’s credit barometer compared the period of March 23 to April 6 with November 5 to 19.

Looking at hard searches, Experian said it had also seen a particularly big jump in the over-60s age group applying for credit cards and loans between the two time periods.

Volvo XC60 is now only available with hybrid powertrains

Volvo has fully electrified the XC60 range, utilising a mix of mild- and plug-in-hybrid powertrains.

The mid-size SUV gets a mix of petrol and diesel mild hybrids, each using a 2.0-litre engine and a 48-volt battery that’s topped up through a kinetic energy recovery system.

Those looking for optimum efficiency can pair it with a front-wheel-drive setup in the 197bhp B4 diesel or 250bhp B5 petrol, while all-wheel drive is available on the 235bhp B5 diesel and 300bhp B6 petrol.

Wet and windy day for most

The north and central regions will have a wet, windy and cloudy day, reports BBC Weather. In the south, it will be brighter but showery at times and it’ll be foggy in the south-east.

Tonight, the rain will stop in most places but some showery outbreaks may occur at times.