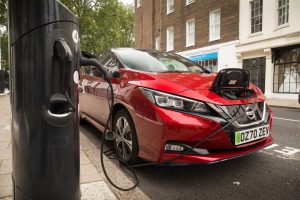 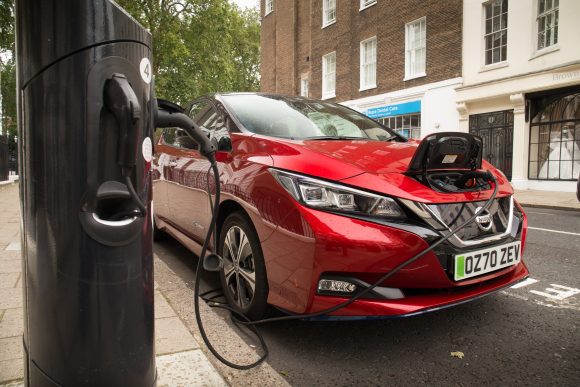 Car buyers need to be convinced that electric vehicles are as good for their pocket as they are for the planet, according to Nissan’s UK managing director Andrew Humberstone.

Talking exclusively to Car Dealer, Humberstone said the environmental benefits of emission-free motoring were well known, but many people were less aware of the potential savings to be made.

Humberstone was speaking in advance of the rollout of ‘green numberplates’ for electric cars in the UK. The new plates, which have a green flash down the left-hand side, can be added to all kinds of EVs from today (Dec 8).

The idea is that councils can introduce incentives for drivers of cars with the special plates, such as access to town centres that are off-limits to petrol or diesel vehicles, or cheaper parking in certain areas.

Nissan has long been a pioneer in the EV space of course. The all-electric hatchback Leaf was launched a decade ago and its e-NV200 van has proved very popular with organisations in both the public and private sectors.

On the way next year is the Nissan Ariya – an all-electric coupe crossover with a range of up to 310 miles. 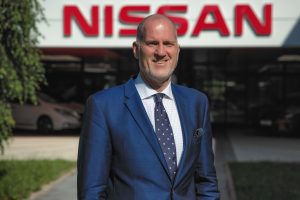 Humberstone: Nissan will be ready for 2030 ban but customers still need convincing when it comes to electric vehicles

The backdrop is that the year 2030 has now been earmarked as the point at which sales of new petrol and diesel cars in the UK will have been phased out.

Humberstone is convinced Nissan will be ready – but before then, there’s work to be done convincing some people that electrified motoring is for them.

‘We’re in a position where we have some really positive messages to share,’ said Humberstone. ‘We understand where the areas of concern lie for the consumer and what we need to address.

‘One of the key messages we need to get out there is that you can buy a Leaf for a lower cost than some of the traditional C-segment rivals before you even take into account the financial benefits of running an EV.

‘Our surveys show that up to 29 per cent of people are looking to cut their motoring expenditure. But up to 55 per cent are not aware of the financial benefits of electric motoring.’

After joining the UK team from Paris, we began with a 100-day strategy document, got about 67 days in and effectively got hijacked by Covid and found ourselves in a situation where we were in crisis management mode and trying to support the network.

Humberstone explained that a Leaf buyer taking possession of a 40kWh N-Connecta model could now put down a £5,000 deposit and pay £249 a month over the course of a three-year deal – an offer that compares favourably with similar packages from the likes of Ford, Peugeot and VW – and including ICE cars as well as EVs.

And electric power is way cheaper than petrol or diesel, with servicing and maintenance costs reduced too, he said.

‘It’s a message that we will really start to reinforce and communicate with the market,’ he added.

Does Humberstone think the green numberplates initiative is a good idea? ‘Yes. Anything that increases the awareness of the environmental elements but also draws attention to the positive financial message is great. To me, it makes perfect sense, it’s perfectly logical and we welcome it.’

Humberstone is coming to the end of his first 12 months as Nissan’s GB managing director – and it’s unlikely to be a year that he (or any of us) will forget.

‘I started back in January after joining the UK team from Paris,’ he recalled.

‘We began with a 100-day strategy document, got about 67 days in and effectively got hijacked by Covid and found ourselves in a situation where we were in crisis management mode and trying to support the network.

‘What we’ve seen since is a fantastic recovery. Yes, it’s been a torrid year but the dealers are in a financially better place now. They, are, after all, our front line and it’s important that we keep them in a healthy financial position.

‘We had a very close relationship with them during the Covid period, with a lot of transparency in terms of our communication.’ 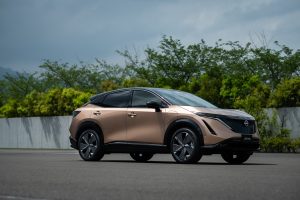 In terms of coping with the challenges of Covid, Humberstone said: ‘The dealers that have done better are the ones who have invested more in their digital infrastructure in terms of technology, dealer management systems and click-and-collect business models.

‘Some of the big plcs and dealer groups have done exceptionally well, but having said that, some of the smaller groups who have invested have also done very well.

‘Covid has brought so much disruption to the market, it’s made it the ideal time to look at new technology.’

And although Nissan is keen to keep in the vanguard of EV development, it hasn’t taken its eye off the ball as far as the internal combustion engine is concerned.

New Juke arrived this year, new Qashqai will soon be with us … and it’s a question of having a ‘bridging strategy’ in place to cater for the current demands of the market as well as planning for the future, says Humberstone.

Ariya, though, is sure to make waves. ‘It’s an incredible car,’ said Humberstone. ‘It’s a pacey car, it’s a very exciting and passionate car to drive, it can do 0-60 in as little as 5.1 seconds, and ergonomically it’s incredible. I’ll be very excited to see it when it arrives here.’