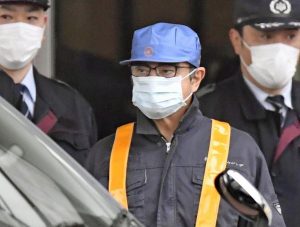 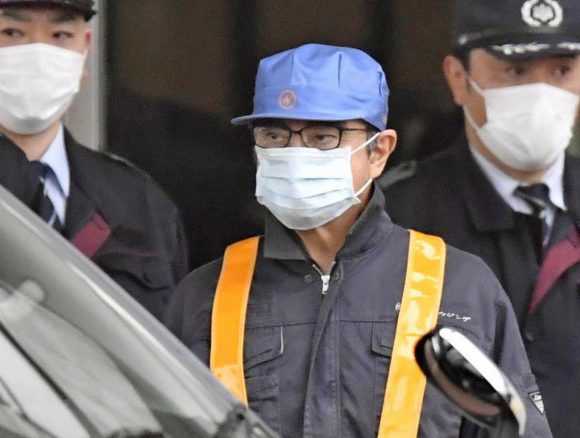 Ghosn left Tokyo Detention Centre yesterday in disguise, wearing a surgical mask, glasses, a hat and a construction worker’s outfit. His identity couldn’t immediately be confirmed with authorities but the resemblance was clear.

Ringed by security guards, he was driven away in a silver van and didn’t speak to reporters at the scene.

The former head of the Renault-Nissan-Mitsubishi Motors Alliance is charged with falsifying financial reports and breach of trust.

Tokyo District Court confirmed the bail – equivalent to about £6.8m – was posted earlier in the day after a judge rejected an appeal from prosecutors requesting his continued detention. That cleared the way for Ghosn to leave the facility after spending nearly four months there since his arrest last November. 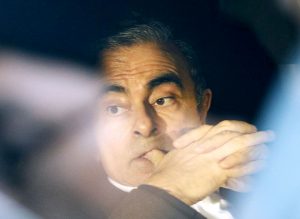 Carlos Ghosn rides in a car after being released from detention. Picture: Takuya Inaba/Kyodo News via AP

Ghosn’s wife, Carole, and one of his daughters were seen leaving the detention centre earlier in the day.

Before his release, Ghosn, who turns 65 on Saturday, issued a statement reasserting his innocence.

‘I am innocent and totally committed to vigorously defending myself in a fair trial against these meritless and unsubstantiated accusations,’ he said.

A date for his trial has not yet been set.

One of Ghosn’s lawyers, Junichiro Hironaka, said his legal team had offered new conditions for his release, such as a surveillance camera at his doorway and a promise not to use the internet. He is allowed to make voice calls but cannot travel abroad.

Suspects in Japan are often detained for months, especially those who insist on their innocence. Some legal experts, including Hironaka, have criticised the system as ‘hostage justice’, saying the long detentions encourage false confessions. 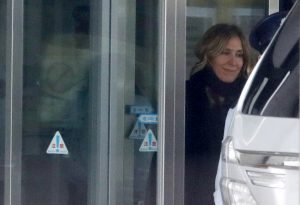 Two of Ghosn’s earlier requests to be released on bail were rejected.

Ghosn says he didn’t falsify financial reports because the compensation he is alleged to have under-reported was never paid or decided on.

The breach-of-trust allegation centres on a temporary transfer of his investment losses to Nissan’s books that he says caused no losses to the car maker. The charge also points to payments to a Saudi businessman that he says were for legitimate services.

Nissan declined to comment on the criminal case against Ghosn but said an internal investigation had found unethical conduct.

Fellow Nissan executive Greg Kelly, who has also been charged with under-reporting Ghosn’s pay, was released from detention on bail of 70 million yen (circa £500,000) in December.

UPDATE – March 8: A lawyer for Ghosn has apologised for advising him to use the disguise. In a blog post today, Takashi Takano said: ‘Because of my immature plan, I ended up sullying a reputation he had built over a lifetime. My strategy failed. I feel very sorry.’ He added that he was solely responsible for the idea and that his motive was simply to give Ghosn media protection.