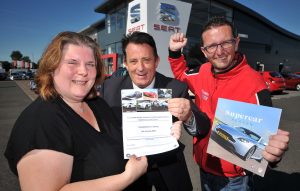 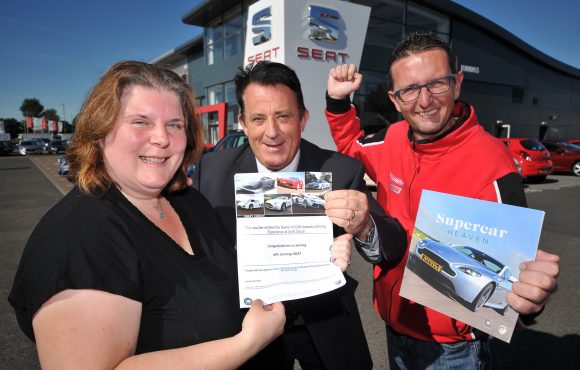 Driving experience dream will come true, thanks to Seat dealership

A MOTORSPORT enthusiast has won a dream prize, thanks to Jennings Seat.

But despite Joanne Boots, from Darlington, being the lucky winner of an ultimate driving experience at Croft Circuit in North Yorkshire, she has donated the prize to her motorsport mad partner, Andrew Mitchell.

She said: ‘It’s always been a dream of Andrew’s to experience the thrills and spills of race driving on a circuit, and thanks to Jennings Seat he is now looking forward to that dream soon becoming a reality.’

The prize came about when the 40-year-old, who has been a British Touring Car Championship enthusiast for 21 years, filled in her details at Jennings Seat’s promotional stand at the race circuit earlier this year.

She said: ‘I couldn’t believe it when I found out I had won the driving experience voucher. I knew straight away that I would be giving it to Andrew. Needless to say, he is absolutely delighted and he feels like Christmas has come early!’

Initially a follower of Formula 1, her 40-year-old partner’s enthusiasm for BTCC began eight years ago.

He said: ‘It was an absolute pleasure presenting the voucher to Joanne and Andrew. I’m sure Andrew will thoroughly enjoy every minute of the driving experience on the 2.1-mile circuit at Croft, especially as it has always been a lifelong dream of his.’

Dedicated to following the sport, the duo have set themselves a challenge that involves visiting every race circuit in the country. They now have just five venues left on their list: Donington Park, Thruxton, Snetterton, Knockhill and Rockingham.

On SuperUnleaded.com: Drag Racer Stays Calm As His Car Blows Up Mid-Race