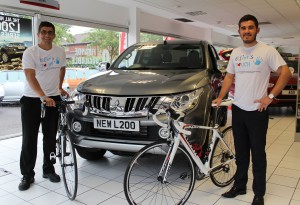 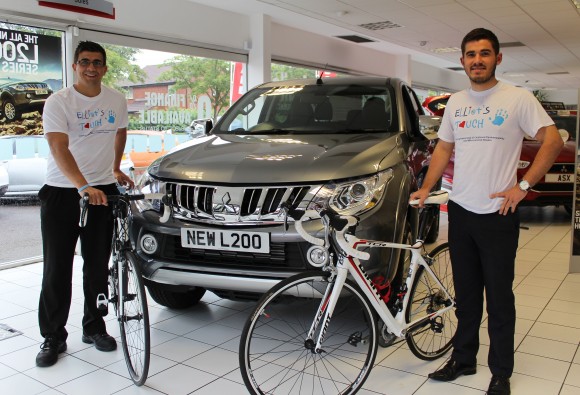 Duo taking on charity challenges in memory of young Elliot

TWO members of staff at a Mitsubishi dealership in Taunton are taking on a host of challenges to raise money for charity in memory of a 13-month-old boy who tragically died of the heart muscle disease cardiomyopathy.

Elliot’s Touch was set up by Donna and Paul Stevens, from Watchet, after their son Elliot passed away in March this year. Their aim is to raise awareness of cardiomyopathy and mitochondrial disease, which Elliot was also diagnosed with, and the fund, in partnership with Somerset Community Foundation, will support organisations that are working on new cures.

Dan Fullbrook, service adviser at K&R Mitsubishi in Bindon Road, is a friend of the couple and has a 20-month-old daughter called Olivia, who was born around the same time as Elliot.

He and his colleague, sales executive Nick Wheadon, will take on three challenges to raise money for the fund, starting with the Quantock Quake, a 35-mile mountain bike ride, on September 6.

Fullbrook, 30, from Watchet, said: ‘Becoming a parent opens your eyes more and I can’t imagine what Donna and Paul have gone through. If we can help in some way to stop this happening to another family then that’s a good thing. Donna and Paul are pleased that we’re doing what we can. They are surprised that people want to help but obviously we want to do all we can.’

The pair’s second challenge will be the Taunton 10K on September 27, followed by the Autumn Storm 2015 bike ride – a 55-mile cycle across Exeter – on October 4.

Wheadon, 21, from Somerton, added: ‘Dan has organised it all and I’m taking part for moral support and to do what I can to help the charity. We’ve been training and we’re looking forward to them. We’ve even talked about doing the Three Peaks Challenge or a triathlon to raise money next year.’

Elliot was taken to Musgrove Park Hospital in Taunton on November 15 with suspected dehydration after having gastroenteritis, but it soon became clear that things were far more serious. After being transferred to Bristol Children’s Hospital he was diagnosed with dilated cardiomyopathy.

Despite showing signs of recovery after treatment, Elliot’s condition began to deteriorate to the point where his heart required a mechanical pump. Donna and Paul were told their son needed a heart transplant. On New Year’s Day, Elliot was taken to London’s Great Ormond Street Hospital, where he was further diagnosed with mitochondrial disease – a rare genetic condition that means the cells do not produce enough energy to work. Although Elliot underwent four successful operations and survived the fifth, he died hours later, on March 3, after almost four months in intensive care.

Donna said: ‘Elliot was our hero, our inspiration. He could always light up a room with his gorgeous smile and big blue eyes. We were so proud of him and his determination to live. We want to do him proud and keep his memory alive.’

MORE: Matt’s getting ready for a fund-raising skydive

On SuperUnleaded.com: Driver sunbathes next to his van in middle of motorway