THE DVSA has won a landmark prosecution of a Hampshire aftermarket emission-control parts manufacturer for supplying products that didn’t meet environmental standards.

The case against European Exhaust and Catalyst Ltd resulted in the company being convicted and landed with a court bill of more than £13,600.

District Judge Gary Lucie, sitting at Portsmouth Magistrates’ Court, fined the Denmead company £3,000 and ordered it to pay £10,460 in costs plus a £170 statutory surcharge, totalling £13,630. 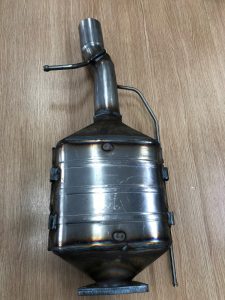 An exhaust that formed part of the investigation

He commented that it had been a very difficult case for sentencing as it was the first prosecution of its kind, but he wanted to bring home the seriousness of offences of this nature in the light of emissions and the environment.

The investigation by the DVSA’s Market Surveillance Unit began in September 2018, with investigators checking vehicles and components to make sure they complied with environmental and safety regulations.

They found diesel particulate filters were supplied for Euro 5 vehicles when they were only approved for Euro 4 vehicles and didn’t have the correct markings.

European Exhaust and Catalyst Ltd admitted three charges of supplying a non-type-approved converter or pollution control device or assemblies for installation in a vehicle without the required legal markings.

The court proceedings began on May 1 this year and were adjourned for a case management hearing, with sentencing taking place on October 28. 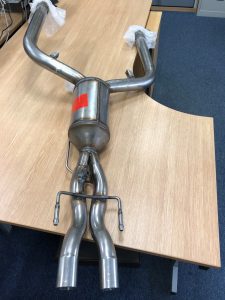 Another exhaust that was part of the investigation

Afterwards, DVSA head of vehicle engineering Neil Barlow said: ‘DVSA’s priority is to protect everyone from unsafe vehicles and make sure they are compliant with the required emissions standards.

‘Motorists expect that replacement parts available on the aftermarket meet the right specifications for their car.

‘This is the first successful prosecution of its kind. We hope it sends a clear message to other parts manufacturers and distributors that they must sell their products in line with the law or face prosecution.’

MORE: Jailed dealer ordered to pay £1 after swindling customers out of hundreds of thousands of pounds