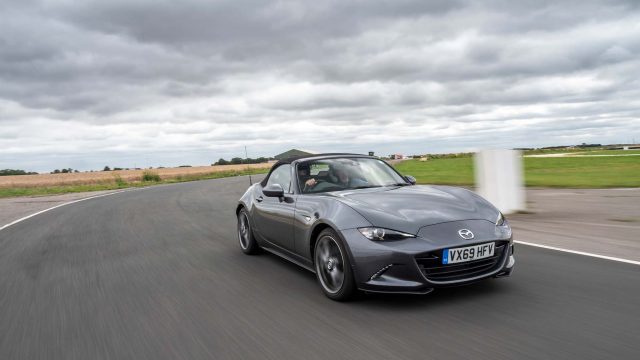 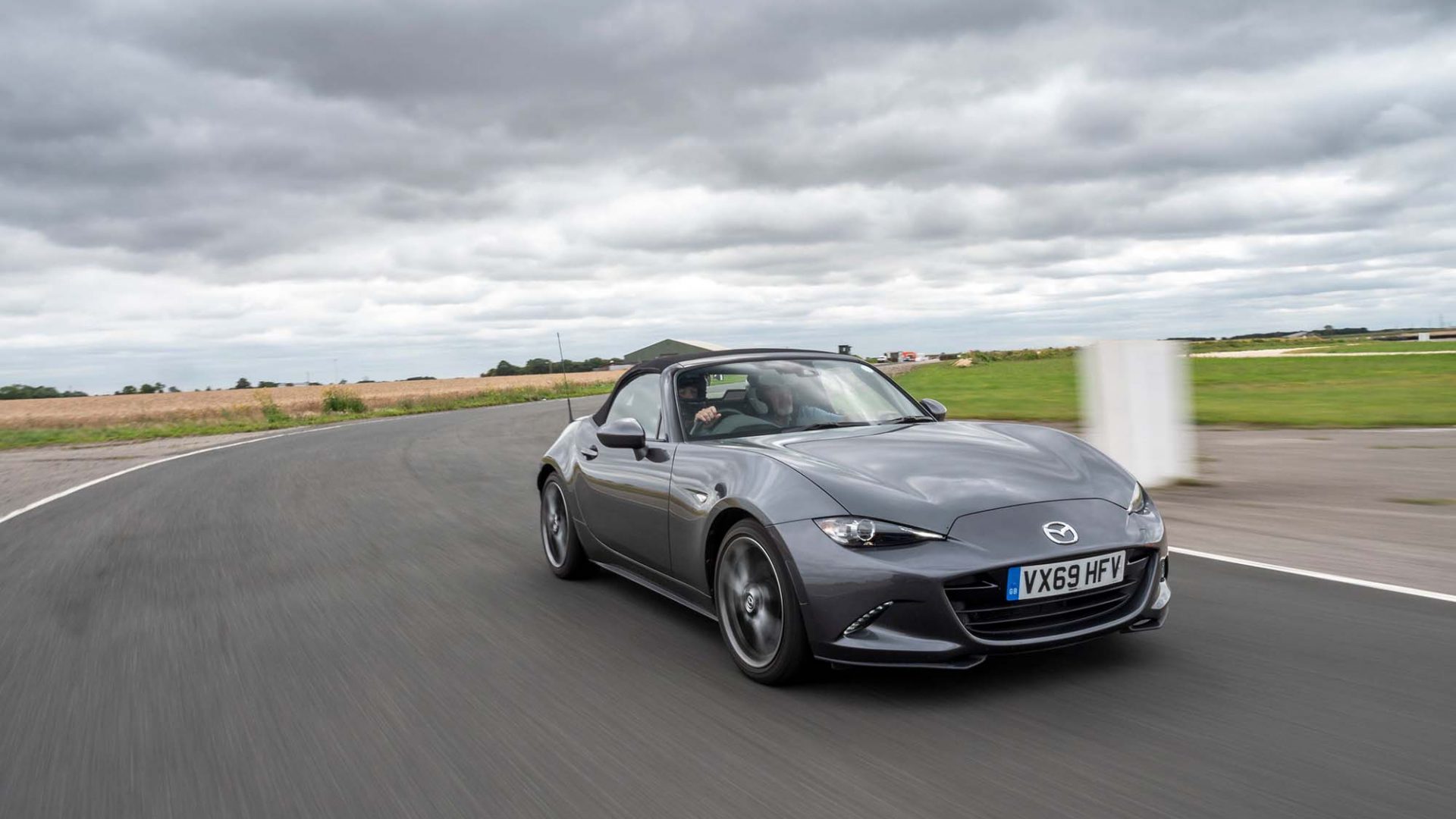 If you’ve spent any amount of time on the UK’s roads recently, you’ll probably also be thinking about how many different standards of driving you’ll see.

From those oblivious to what lane they’re in on the motorway to others glued to their phones as if there’s a magnetic field, there are plenty of areas for improvement.

This change in standard of driving is perhaps to be expected, though.

As a result of lockdowns, many went from driving their car on a daily basis to only using it a handful of times in a month while also remaining local, and it’s only natural for a skill to get worse if not practised regularly.

Mark Hales is a racing driver-turned-journalist who now spends most of his days teaching people how to drive.

But we’re not talking about those sticking L-plates on their car for the first time, rather how to drive quickly and safely.

We’re on the test track today, but there is quite a lot of overlap between this and road driving, with a surprising amount of rules that should be applied to every journey.

Blyton Park is a lesser-known racetrack near Gainsborough in Lincolnshire. It’s a relatively new circuit too, being repurposed from its original use as an airfield just a decade ago.

That said, it’s played an important role in the development of some well-known racing drivers, not least current F1 driver Lando Norris.

Our wheels for the day are pretty good, too: Hales’s Mazda MX-5 that he uses as his everyday transport.

With its combination of lightness, rear-wheel drive and manual gearbox, it’s the ideal choice to get to grips with track driving.

We actually start the day nowhere near the driving seat of the MX-5 but in a portable building at the back of the track. Think detention in secondary school and you’d get the picture. 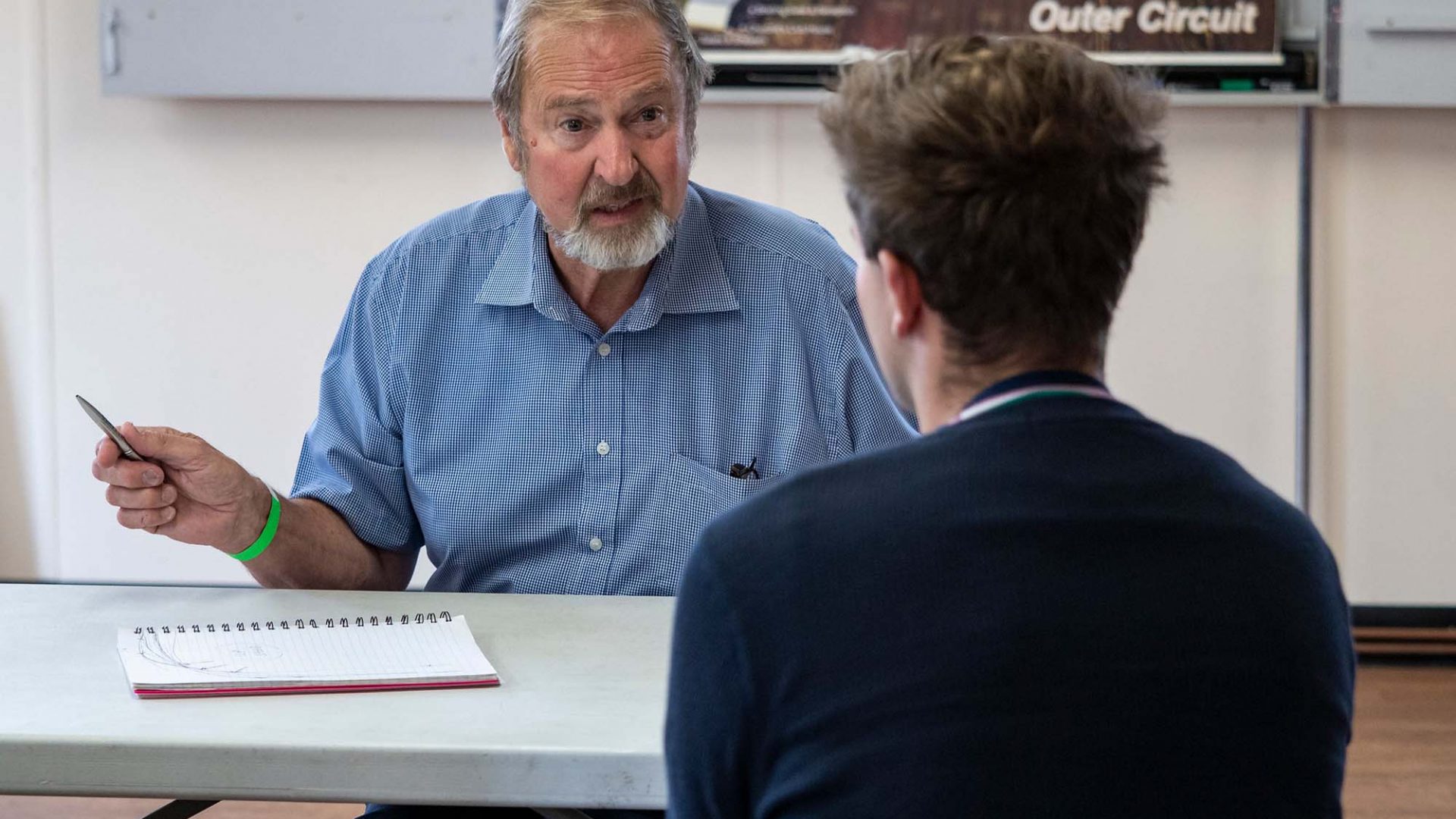 Back to the classroom for Ted!

But it’s this ‘grounding’ that is key to learning the basics – I should point out that this is my first experience of driving on a track, so we’re very much at a novice level.

Hales kicks off the day with some stark advice: ‘You can’t know how to do this.

‘Having a licence shows you how to operate a car and control it safely on roads, but you have to override your natural instinct as a matter of safety if you want to drive quickly.’

As someone who’s driven everything from historic racers to modern hypercars on track – as well as almost priceless Ferrari 250 GTOs – Hales knows more than most, and he’s clear that we have to understand the science behind driving quickly.

It’s why we spend part of the day learning about grip levels and understanding weight transfer by looking at Venn diagrams.

But the first bit of advice we learn is what needs to be applied to all driving, and it’s something that’s surprisingly difficult to overcome.

While we’re always told to look ahead, it’s all too easy to just focus on what’s directly in front of us.

That’s the thing Hales immediately picks up on as soon as we head out on track.

‘Motorists tend to drive looking at the end of the bonnet, but where you look is the most important part of driving,’ Hales tells us in his remarkably calm and unflustered fashion.

‘Where you look is where you will go. You must look where you want to go.

‘Any distraction is significant, and primarily the faster you go, the further up the road you will have to look.’ 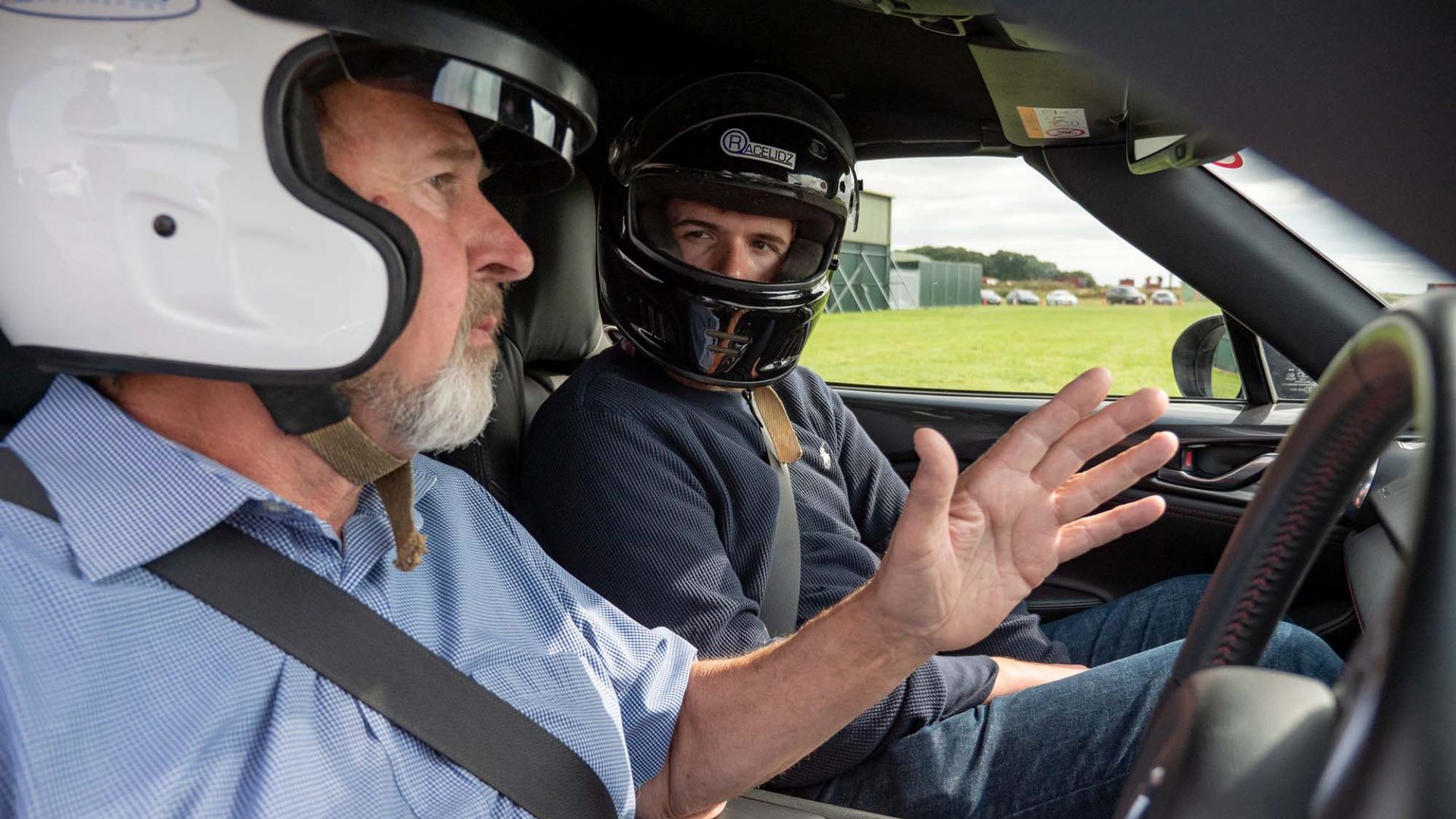 On track, it means that as soon as you’re coming out of one corner your eyes need to be focused on the next, and always think that one step ahead.

It’s a really important rule, and one that seems especially true of driving on public roads.

After some time out on Blyton trying to get my head round this bit, the next part of the day is all about exploring grip levels.

It’s something that’s all too easy to forget – although it is a part especially emphasised in snow and ice, for example.

Essentially, Hales is teaching us about reaction times. We’re not talking about our dim-witted responses but those of the car and, predominantly, the tyres.

As a driver of any powerful rear-wheel-drive car will tell you, there’s only so much the tyres are capable of doing in terms of gripping the tarmac, and it essentially means you need to steer slightly before you actually want to.

We’re talking just a quarter of a second, but the faster you go, the more it becomes apparent.

You also don’t want to ‘surprise’ a tyre, which is why smooth driving is so important rather than slamming a car into a corner, which is when you’re most likely to lose control.

It’s this part of the day that’s the most fun as it’s all about exploring the car’s limits, which – in the case of the MX-5 – is a rather long way.

While agile and eager, these little Mazdas rarely feel unsettled and give you the confidence to keep pushing until you get to the ‘danger zone’.

Hales calls this the ‘most exciting bit’, and while not something you can or should do on the road, it is hugely enjoyable at Blyton Park, where the combination of fast and flowing corners and sharp left-handers are great for putting what we’ve been taught into practice.

The other key thing we learn about is consistency, since especially during sustained track driving there’s little point being quick unless you can maintain it. 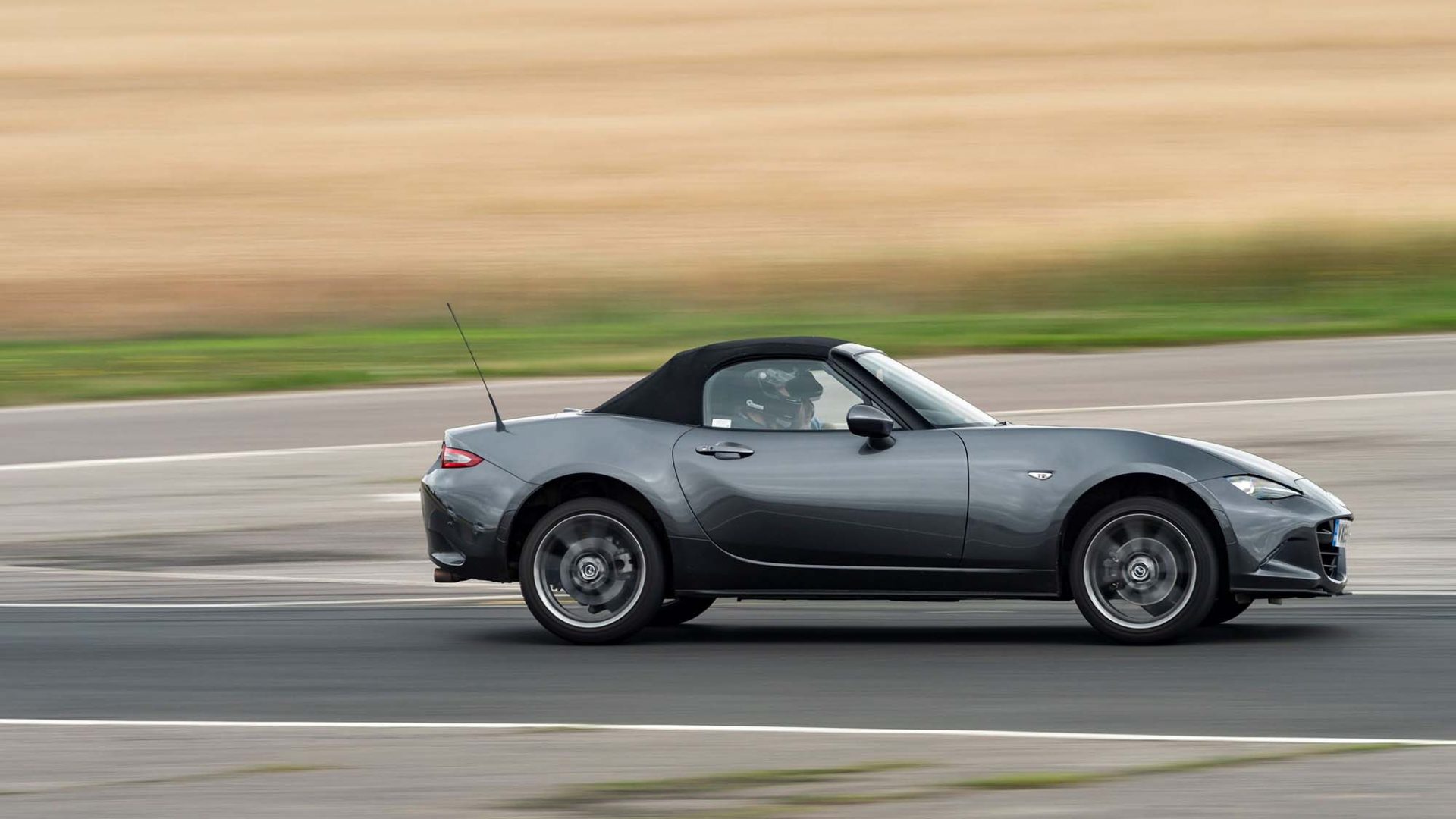 As Hales explains, you want to spend the shortest length of of time driving slowly.

It might sound pretty obvious, but it gets us into the mindset of not slamming the car into a corner too much because of the time it takes for the MX-5 to get back up to speed.

That said, Hales isn’t always the most impressed by our driving style, especially as the words ‘It’s optional how much you mash the pedals’ are uttered quite loudly at one point.

We take things back slightly after this…

But it’s all these little things plus so much more that forges some of the best racing drivers.

Even at the age of 72, Hales is a force to be reckoned with.

We swap seats on several occasions and the speed at which he can get something like the MX-5 round the track – its 181bhp figure is plenty, but not a lot by performance car standards – is astounding.

It’s clear we’re some way off having the ‘sixth sense’ the best racing drivers have, but it feels like we’re a long way ahead of where we were just a few hours earlier.

And with some of these rules applicable to our drive home and beyond, there’s plenty that time on track can teach you overall about driving.

Hopefully, it won’t be long before we’re back on a circuit again…

This feature appears in the latest edition of Car Dealer, which is packed with news, views, reviews, interviews and more. Click here to read and download it for free.