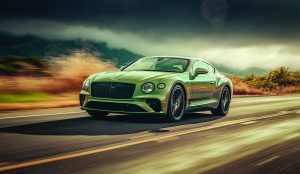 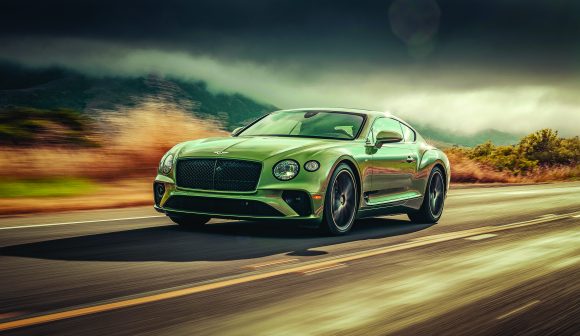 The Bentley Continental GT has long been the default choice in the luxurious grand tourer segment. And while the top-notch W12 has been retained on the new Conti, we haven’t yet seen a V8 option carried over from the older
car to the new.

That’s until now. Crewe-based Bentley has introduced a 4.0-litre twin-turbocharged V8 engine into the Continental, promising a reduction in overall weight without any decrease in outright performance. The W12 is still available, mind you.

As mentioned, the biggest difference here is that engine. We’ll get to it in closer detail a little later, but for now the major changes elsewhere are subtle. There are V8 badges on the car’s flanks, while Bentley’s Dynamic ride that’s standard-fit on the W12 is now an optional extra.

It’s packed with safety tech, such as active lane assist and traffic jam assist, while retaining that all-important sense of occasion that you get with a Bentley. The interior is hand-finished, and a new revolving infotainment screen adds a sense of theatre to the cabin.

Under the Bentley’s long, sweeping bonnet is where the biggest change lies. The new 4.0-litre twin-turbocharged V8 produces 542bhp and a hefty 770Nm of torque.

It means that the Continental GT is good for a 0-60mph dash in 3.9 seconds, as well as a 198mph top speed. They’re impressive figures for what is still a large car.

It’s down to placing the turbochargers inside the ‘V’ of the engine for better response, as well as the car’s all-wheel-drive system. Power is, incidentally, sent to these four wheels through an eight-speed dual-clutch gearbox.

The engine has been placed further back than before to help with the car’s balance, while three-chamber air springs deliver the best possible ride, as well as giving the driver the ability to firm them up for more ‘spirited’ driving.

Look at the Continental GT and, upon first impressions, you’d argue that its sheer size would be a limiting factor. In truth, around town its bulk does obstruct you slightly, with that long bonnet and low-slung driving position meaning low-speed manoeuvres take a little more effort. It’s what you’d expect from a car like this, though.

But it’s with increased speed where the Bentley manages to disguise its size so well. Turn-in is brilliantly sharp, and thanks to both the wealth of torque at your disposal and the all-wheel-drive system, you can pin the throttle at the corner’s exit and find it dragging itself out with brutish force. Even sharper corners feel no match for it, and then when you’re done seeing where its limits lie, it’ll settle down to a cruise in typical Bentley fashion.

It’s when you pick up the pace that things change elsewhere too. The V8 is almost fighter plane-loud in its aural assault on your ears, bellowing and crackling – it’s full of character.

The new Continental GT is a well-rounded advance on the older car in terms of looks.

It’s impressive, that’s for sure, and during our time in California it caused many a head to turn and smartphone snap. The bold front headlights sit either side of a now even larger front grille, while sharp cuts help keep things interesting on the flanks.

The interior of the Continental GT has been superbly finished, with high-quality leather meeting metal vents and glossy trim pieces. Ergonomically, it’s spot on too.

Does it feel worthy of its £148,000 base price? For sure. There are plenty of knurled controls, and the buttons have a solid feeling to them too.

Our only real issue comes from the passenger’s seat. There’s no real padding on the side closest to the driver, and a lack of grab handle near the gearstick (as you’ll find on a variety of sports cars) or in the traditional position above the window means your legs can quite often bash into the main tunnel when cornering hard. It’s a small niggle, we’ll admit, but it’s a niggle all the same.

The biggest change to the latest generation of Continental GT is the inclusion of a 12.3-inch central touchscreen. It houses satellite navigation, media functions and Apple CarPlay smartphone connectivity too. The infotainment was a weak point for the older Continental, but this is a far better system, thanks to an easy-to-navigate layout and responsive screen.

And if that wasn’t enough, it rotates. Press a button and the screen turns to reveal a set of analogue dials, or do without completely and leave a clean piece of wood trim there instead. It allows you to declutter the cabin and it works well. It’s a little pricey, however – tick the box and you’ll find an additional £4,770 on the car’s price.

Autoblog said driving this car ‘is not unlike that trick of yanking the cloth out from under a fully set table’. Autocar said: ‘There is no doubt that this is the best-handling, most enjoyable Bentley of the modern era.’

The Continental GT is, as the name suggests, a grand tourer first and foremost. But this V8 version goes further than that. The weight shed by swapping the W12 for the V8 gives it genuine agility in the corners, while the engine’s refinement means it’s still got that cross-country ability you want from a car of this type.

Although many would see the W12 as the ‘top’ engine and therefore the go-to option, we’d argue the opposite is the case.