Chancellor Rishi Sunak has announced plans to allow furloughed staff back to work part time from July 1 – but bosses will have to contribute towards their pay in a stepped approach.

National insurance and pension contributions will have to be covered by the employer from August – a contribution of around five per cent towards the scheme.

In September, employers will be asked to pay 10 per cent towards the costs, and in October that will rise to 20 per cent.

The scheme will also be given more flexibility from July 1 allowing employers to bring back staff on a part time basis.

The chancellor also announced the self employment income support scheme will be extended.

Applications for that will open in August and will be paid out in one instalment to cover three months’ worth of average monthly profits. In line with the furlough scheme tweaks, it will be paid out at 70 per cent.

Sunak said: ‘As we reopen the economy, there is broad consensus across the political and economic spectrum, the furlough scheme cannot continue indefinitely.

‘In June and July the scheme will continue as before with no employer contribution at all. In August, the taxpayer contribution to people’s wages will stay at 80 per cent.

‘Employers will only be asked to pay National Insurance and employer pension contributions, which, for the average claim, account for just five per cent of total employment costs.’

Currently, the Coronavirus Jobs Retention Scheme sees the government cover 80 per cent of staff’s pay up to £2,500 a month up to July 31.

Staff will be allowed back part time for as many hours as companies need from July 1 – but the chancellor has shut the scheme for new entrants and confirmed the scheme will end in October.

There are currently 8.4m workers on the furlough scheme with one million businesses taking advantage of the subsidy.

So far £15bn has been claimed by companies.

There have been concerns that a dramatic change to the furlough scheme at the end of July would be a cliff-edge ending for employers and many staff currently on furlough would be made redundant.

Car dealers still have thousands of staff on furlough and while many are bringing staff back slowly ahead of Monday’s restart, there isn’t a need for everyone to return yet.

This tapered end to the furlough scheme will give dealers a chance to get their businesses back up to speed without having to take on staff costs they don’t need too soon. 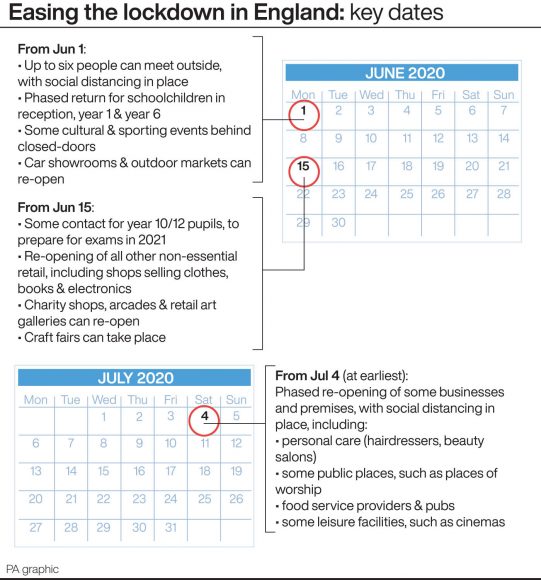 ‘As we move to the phase where businesses have to contribute more towards furloughed workers, business owners will have to take a long hard look at staffing levels and the shape of their teams going forwards.

‘The industry will clearly welcome the gradual introduction of the employers’ furlough contributions and the fact that part time working is to start from the beginning of July. This gives business time to read demand changes.

‘The customer has undoubtedly changed, making a massive leap forwards in digital capability and acceptance and we will need to evolve our teams accordingly. The good news is that we get June to see how the market picks up and the customers react, before making those difficult role-change or redundancy decisions during July.’

Last week, Sunak said he is not counting on the ‘V-shaped’ recovery many had been hoping for when the country was locked down to prevent the spread of the virus.

‘It is not obvious that there will be an immediate bounce-back,’ the Chancellor told the Lords Economic Affairs Committee, adding that the economy is likely to see a huge downturn.

‘Obviously the impact will be severe. We are likely to face a severe recession, the likes of which we have never seen.’

Meanwhile, the Bounce Back Loan has proved the popular. Banks have approved £18.49bn in loans to just over 465,000 businesses up and down the country, which are 100 per cent backed by the government.

Some £8.15bn has been lent by banks under the Coronavirus Business Interruption Loan Scheme (CBILS) to 43,045 businesses. CBILS loans are backed to 80 per cent by the government and require banks to carry out checks on the borrowers.

A similar scheme, the CLBILS, for larger businesses, has lent £820m to 154 businesses.

Commission should have been paid to furloughed staff all along