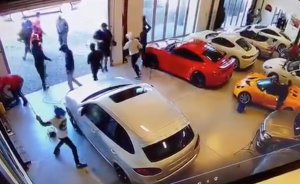 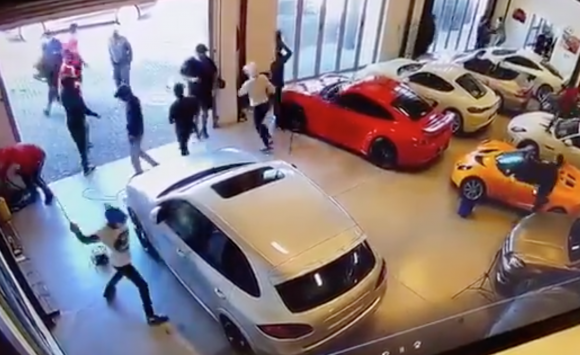 A gang of 40 people smashed windscreens and attacked cars with poles as they ransacked a luxury car dealership.

The attack, caught on CCTV, happened after suspects threatened staff with guns and demanded to be given the keys to cars in the luxury car showroom.

Footage shows a McLaren with its rear window smashed, a Bentley Continental GT with a broken windscreen as well as two Aston Martins and a Porsche damaged.

The gang can be seen running amok around the showroom, smashing the windscreens with poles as one of the attackers openly brandishes a gun.

The attack, which took place yesterday in Cape Town, South Africa, is being investigated by police.

Separate footage, uploaded to Twitter, shows the destruction from a different angle as a staff member walks through The Toy Shop dealership after the attack.

Paperwork is seen strewn across floor amid the destruction.

A police spokesperson said: ‘The circumstances surrounding the incident are under investigation.

‘According to information, about 40 suspects entered the business premises, threatened the employees with firearms and demanded two vehicles.

‘They were not given vehicles, thereafter, the suspects smashed windows and lights of vehicles on display.

‘Eight vehicles were damaged. The possibility that the incident is extortion-related cannot be ruled out.’