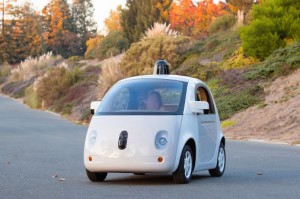 GOOGLE has unveiled its fully-functioning driverless car – and says it will spend the Christmas holidays giving it a good workout on the test track.

‘The vehicle we unveiled in May was an early mock-up — it didn’t even have real headlights! Since then, we’ve been working on different prototypes-of-prototypes, each designed to test different systems of a self-driving car — for example, the typical “car” parts like steering and braking, as well as the “self-driving” parts like the computer and sensors.

‘We’ve now put all those systems together in this fully-functional vehicle — our first complete prototype for fully-autonomous driving.

‘We’re going to be spending the holidays zipping around our test track, and we hope to see you on the streets of Northern California in the new year.

‘Our safety drivers will continue to oversee the vehicle for a while longer, using temporary manual controls as needed while we continue to test and learn.  Happy holidays!’

Self-driving technology is getting more advanced all the time. Already, Lexus SUVs and Toyota Prius cars have driven hundreds of thousands of miles on public roads using the special equipment, and Google says it plans to make 100 prototype cars operated by two simple buttons – go and stop – and navigate using GPS, sensors and camera data.

Ford has already unveiled a self-driving car that, it says, takes 2.5 million measurements every second.

Next year, Milton Keynes will unveil 20 autonomous ‘pods’ which will run on ‘lanes’ separated from pedestrians from the train station to the town. If successful, the project may be rolled out across the country.