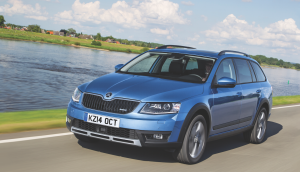 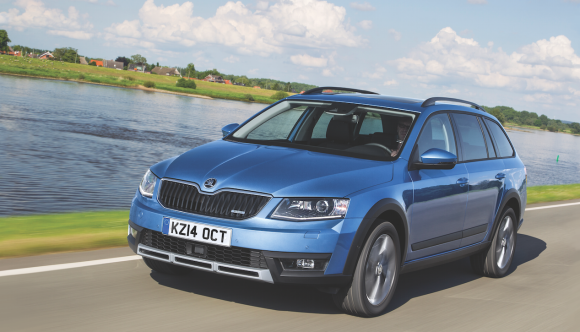 Is the new Octavia Scout all style and no substance?

Think of it as an Octavia Estate that’s been given a khaki shirt, a coloured scarf, a woggle and a campaign hat. The regular Octavia Estate has been jacked up by 31mm, a newer type of four-wheel-drive has been fitted, as has a butch bodykit to give a rough-and-tumble look. Scouts can also pull up to two tonnes – perfect for country types with horse boxes to move about.

Just two engines: A 148bhp 2.0-litre diesel with a six-speed manual ’box or a more powerful version with 182bhp. While the former does around 55mpg and emits 129g/km of CO2, it’s the latter that’s the more important news. Thanks to its 182bhp, it’s the most powerful Scout ever. Combined fuel consumption is the same as the lower output diesel, while CO2 emissions are 134g/km. Both engines come with sophisticated ‘Haldex-5’ four-wheel-drive, an electronic differential lock, stop/start and brake energy recovery systems.

There’s just one trim level and, justifying its position towards the top of the Octavia range, it’s pretty well equipped. For £25,315 (£27,990 for the 182bhp version), there’s black or brown leather and Alcantara upholstery, a multi-function steering wheel, black or brown/black dashboard and a smattering of Scout badges. Plastic panels fitted underneath protect the car over rough ground, meaning the Scout really can do a bit of light-to-middling off-road work.

It would be easy to dismiss this Scout as just an Octavia in drag, but it isn’t. That extra 31mm of ride-height really does make a difference to the way the Scout drives compared with any other Octavia estate. It never wallows or leans excessively in corners, but you are constantly aware of the higher centre of gravity. But that extra height really comes into its own off-road. The car tackles the rough stuff with aplomb thanks to decent approach and departure angles and the electronic differential lock – a clever system that detects if one wheel is slipping and then sends the power to the opposite wheel, giving traction. Apart from this, the driving experience is typical Octavia – nothing too much to say, and that’s not a bad thing.

What Car? said: ‘In our opinion, the Scout is more than just a “lifestyle” statement – it gives you genuine off- road ability without the need for a proper off-roader.’

This particular car follows the path trodden by a number of other Skoda Scouts, but it’s this car that is the most accomplished. If customers need to go off- road and have around £25k-£28k to spend, they would be hard-pressed to find something as good. If they don’t need full off-road capability but want the reassurance of four-wheel-drive, Skoda’s Octavia Estate 4×4, priced from £21,965, is more than up to the job – and we’d suggest pushing towards that model instead.