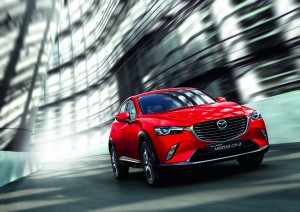 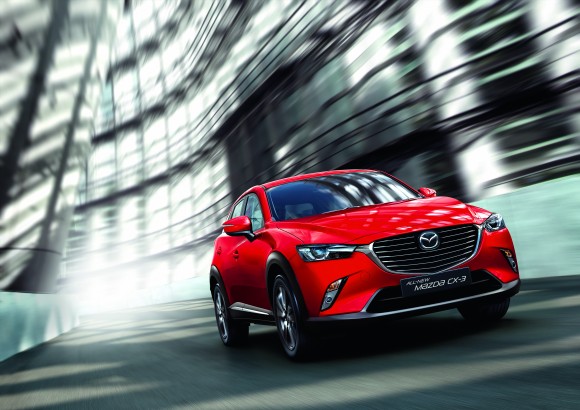 In a nutshell, it’s a small SUV from Mazda, which the company hopes will help it achieve record-breaking sales figures for 2015. With a flurry of new vehicles arriving in showrooms this year (the new version of the company’s iconic roadster MX-5 will be with us a bit later) they could well pull it off. However, CX-3 doesn’t have the compact SUV segment to itself. Don’t bet against Mazda though. There is a bit of a buzz around the brand at the moment and the CX-3 should do well. It arrived in showrooms last month.

Buyers have a choice of one diesel and two petrol variants. Offered with either 118bhp or 148bhp, the SKYACTIV-G 2.0-litre petrol engine is predicted to account for around 60 per cent of UK sales. Available in all five trim levels, and in both manual and automatic guises, the 118bhp engine with front-wheel drive powers most of the cars in the line-up. However, at the top of the petrol range, the 148bhp engine is matched exclusively to all-wheel-drive and is

equipped with a six-speed manual gearbox in Sport Nav trim. Having made its debut in the all-new Mazda 2 supermini, the 104bhp SKYACTIV-D 1.5-litre diesel engine completes the engine line-up. As with petrol versions, front-wheel-drive versions make up the majority of the range, although a four-wheel-drive version is offered in the top trim level. With CO2 emissions from just 105g/km, the front-wheel-drive SKYACTIV-D has an official combined economy of 70.6mpg.

Generous. This really is where Mazda scores highly, especially in the areas of tech and safety. Entry-level SE cars come with 16-inch alloy wheels, power-folding door mirrors, ‘coming home’ lights and manual air-con. We liked the seven-inch colour touch screen, and the car has a great-sounding audio system with six speakers, CD Player, plus the usual iPod, USB and Bluetooth connectivity. Safety-wise, there’s hill-hold assist and a tyre pressure monitoring system. Move up the range and more goodies are thrown into the mix, of course. A lane departure warning system, smart city brake support and rear privacy glass are added at SE-L level, while a smart keyless entry system, head-up display, digital speedometer and reversing camera are included in range-topping Sport Nav models.

We had a spin in the car expected to be the best-seller, the 118bhp 2.0-litre front-wheel-drive petrol version in SE-L trim and were pretty impressed. Cabin refinement is good, the car holds the road well with minimal body roll and the engine is willing and responsive. A three-and-a-half-hour tour around the Scotland-England border country flew by and even after such a long drive, we exited the vehicle without any aches, pains or tiredness. Design-wise, it’s certainly a good-looker, but we thought the dash looked a tad drab and the readouts lacked a little clarity.

Motoring Research said: ‘Mazda has nailed it with the CX-3, creating what can certainly be described as a sporty crossover.’ Auto Trader said: ‘It’s expensive to buy and not practical enough, so before you get one, make sure you prioritise style and fun above all else.’

Mazda should have another winner on its hands with the CX-3. We were told that the company received ‘an incredibly rich mix of pre-orders’ before the arrival of CX-3 in showrooms, with 80 per cent for the top-spec Sport Nav. And with a car as accomplished and likeable as this, it’s not hard to see why.